This post has been updated since its initial publication with 2015 data from Unionstats.com.

Yesterday, the federal Bureau of Labor Statistics released its annual count of how many American employees are union members and what percentage of the workforce consists of union members. Overall union density remained constant at 11.1% of wage and salary employees, but private-sector union density had a dead-cat bounce from 2014’s low of 6.6 percent up to 6.7 percent.

Given the aggressiveness of the Obama Administration, its NLRB, and its allies, the slight uptick in private-sector unionism should concern those interested in employee rights. It also provides another reason for Congress to take up the Employee Rights Act, a widely supported piece of labor reform legislation.

Additionally, the state-by-state data suggest that right-to-work laws may not have as big an impact on union membership as other labor reforms. Michigan, which passed a right-to-work law that took effect in 2013, showed an increase in its unionization rate from 2014 to 2015. On the other hand, Wisconsin, which made substantial reforms to its public employee unions in 2011-12, has seen steep declines in its public-employee union rates. (See chart below.) 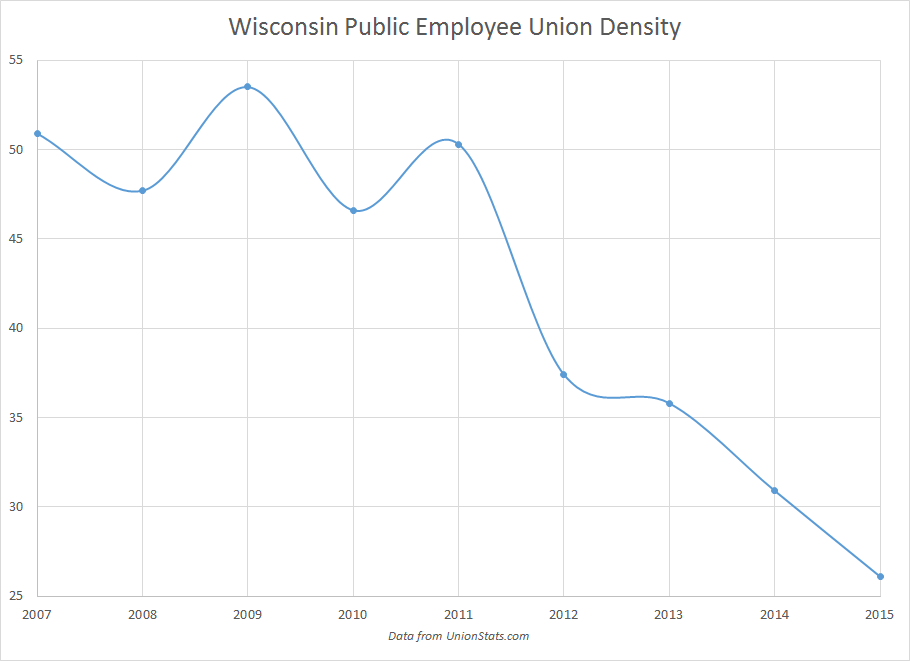 What’s the difference? Two of the Wisconsin reforms require re-certification of existing unions and set the re-certification vote bar at a true majority of the full bargaining unit. The effect is clear: Given the opportunity in a secret ballot vote to leave their unions, tens of thousands of Wisconsin public employees have done so. (These reforms are similar to provisions of the Employee Rights Act.) In 2015, the Bureau of Labor Statistics found continued declines in the overall state unionization rate and UnionStats found declines in both sectors, suggesting that the right-to-work law passed in 2015 combined with these reforms are a potent cocktail to combat union abuses of employee rights.

The lesson of Wisconsin’s and Michigan’s different paths is clear: Employee rights reform needs to expand beyond right-to-work. That will require a federal effort—it will require the Employee Rights Act.