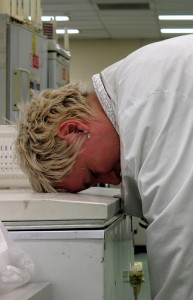 Earlier this year in Vermont, the American Federation of Teachers (AFT) successfully  lobbied the state legislature to create a new pool of potential union employees out of home-based childcare providers in the state. The goal? Like the SEIU, which recently got smacked down by the Supreme Court for compelling home-based healthcare aides who didn’t join the union to pay dues, the AFT hoped to established a new source of dues cash.

The governor signed the AFT-backed law declaring home childcare providers public employees eligible for unionization in June. All that Randi Weingarten’s Vermont lieutenants needed to add roughly 1,500 dues-payers to her ranks was an easy victory in a unionization election.

Except that didn’t happen. Preliminary results reported by the Vermont Labor Relations Board (which handles public employee union elections in Vermont) indicate that the AFT lost the election, with 418 employees voting against unionization to 398 employees voting to join Randi.

While AFT organizers vow to try again, that may be harder than Randi and her lieutenants hope. The providers seeking to remain independent of Randi’s $334 million empire organized an opposition group, Vermonters for the Independence of Child Care Professionals, to beat back Randi’s charge.

And the divide is deeply rooted: While Randi and her union argue the independent providers are employees, the “no union” side notes, “We’re all small businesses, we’re not employees. The childcare union would have made us employees.”

Vermont childcare workers can expect the AFT to try again, but for now, kudos.