Which Solutions Do Chicago Teachers Want To Be A Part Of? 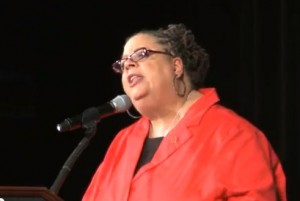 Give nothing, take more.

That’s the new motto coming from teachers union delegates after a surprising turn of events in Chicago’s first teachers strike in a generation. The Chicago Teachers Union (CTU) extended its strike for at least another two days until the governing body, the House of Delegates, meets again on Tuesday—Day 7 of the strike.

On late Saturday, following a teachers rally, sources from the CTU House of Delegates meeting reported that CTU leadership was accused of negotiating a bad deal.

The source added that late into Saturday night, [CTU President Karen] Lewis’ caucus shouted obscenities at her and the other leaders. “You sold out” and “Rahm’s getting everything they wanted, what the hell did we get?” [t]he source quoted caucus members saying to her.

The source reported that Lewis, who was at this point is exhausted [sic], indicated she’s done negotiating and asked “Will my own caucus defy me?”

The CTU says that the delegates need more time to review the proposal. Chicago Mayor Rahm Emanuel is seeking an injunction to end the strike and force teachers back into the classroom. He’s referring to this latest action by CTU as “a delay of choice.”

Meanwhile, the national American Federation of Teachers (AFT), the CTU’s parent union, is allegedly fearing a backlash and wants a settlement soon. As the AFT and National Education Association (NEA) know, teachers unions already stand on shaky ground, even among their own members.

AFT and NEA learned that lesson in Wisconsin, as both of their affiliated state unions lost 35 percent and 22 percent of their members respectively after Governor Scott Walker instituted reforms to make union membership voluntary.

Unions aren’t getting the support they’re used to. Even the Washington Post editorial board has said that teachers unions need to stop passing the buck.

What matters is what educators do in the face of poverty. That’s why Mr. Emanuel was right to push for an evaluation system that differentiates among teachers and values those who are effective in getting children to learn.

No one thinks that teachers’ whole careers should be based on one standardized test. Evaluations must be fair, tests need to be improved and standards must be tightened. But unions need to stop blaming poverty and become part of the solution. If they don’t think they can, they should stop standing in the way of charter schools that give parents the option of teachers who believe their children can learn.

Instead of looking for solutions to fix failing schools, CTU is obsessed with blocking the school house door in order to support its own agenda.

There must be some CTU members who are not as radical as Lewis’ caucus, and would agree with the Washington Post and accept Emanuel’s reforms. But without any other options, those teachers who want to be part of the education solution, not lining Big Labor’s pockets, are stuck at home—neither working nor getting paid—for at least two more days. Don’t be surprised if those teachers spend the time perusing the classified ads in a Wisconsin newspaper.