SEIU in Oregon: For the love of the…? 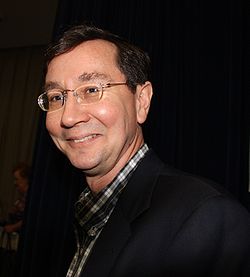 Gov. Ted Kulongoski of Oregon has nominated Multnomah County Chairman Ted Wheeler to the position of State Treasurer, following the death of Ben Westlund on Sunday.

Want to know why Wheeler, and not another state representative Greg Macpherson, got the nod? According to The Oregonian:

When Macpherson ran for attorney general in 2008, Service Employees International Union, the largest of the state employee unions, gave more than $300,000 to his Democratic primary opponent, John Kroger. The unprecedented union contribution to an attorney general’s race helped power Kroger to victory over Macpherson.

But see, it wouldn’t be classy to say that unions didn’t like MacPherson (who is actually a friend of the governor) because he wanted to reform the pension system. The reason that SEIU local gives for the reason that Kroger (see image) was so flagrantly funded and MacPherson so not? The Oregonian explains in another article:

Arthur Towers, political director for the SEIU local in Salem, wasn’t making any big pronouncements about his union spending heavily against Macpherson if he got in the treasurer’s race.  He  insisted that a big reason the union gave so much in the attorney general’s  race is that the “members fell in love with Kroger,” and that candidates don’t come along like that often.

That’s right. Far from some political agenda, it was love.

But hey, Oregon is a unique place. In January, at the behest of their public sector unions, Oregon voted to increase their taxes for the first time since 1931. During the lead up to the tax bill’s passage, it is interesting to note that the leading anti-tax politician was indicted by none other than John Kroger.

The Oregon Department of Justice said Monday that Sizemore and his wife, Cindy Sizemore, are each charged with three counts of evading Oregon personal income taxes. Each count carries a maximum punishment of five years and a $125,000 fine. […] Bill Sizemore called the charges a “political attack” by public employee unions and state Attorney General John Kroger, a Democrat who had union support.