Posted on Jan 24, 2023 by LaborPains.org Team
The Communications Workers of America (CWA) was built on the 20th-century telephone industry, but has recently turned its focus to the 21st century digital workforce. The union’s Campaign to Organize Digital Employees (CODE) “is a network of worker-organizers and their staff working every single day to build the voice and power necessary to ensure the future of the tech, game, and digital industries in the United States and Canada.”

But like a boomer dad trying out a pair of skinny jeans, the union’s mid-life re-brand doesn’t look half as good as it thinks.

The latest example comes from Boston, where the CWA today withdrew a petition to organize the video game studio Proletariat. The union announced the campaign to organize the video game studio just weeks ago. In its press release at the time, CWA said the outcome was all-but-certain, and suggested the company dispense with a secret ballot vote and recognize the union:

A supermajority of workers at Activision Blizzard’s Proletariat studio have announced that they are forming the Proletariat Workers Alliance/CWA and have filed for a union representation election with the National Labor Relations Board. Prior to filing for an election, the workers asked that management voluntarily recognize their union and respect their right to organize without retaliation or interference.

To Proletariat’s credit, it declined the union’s invitation, and instead asked for an “anonymous voting process” to ensure everyone’s voice was heard. If that seems like a reasonable and pro-worker request, you’re not thinking like a CWA organizer. The union’s organizing committee went ballistic, launching a Twitter rant that said the company’s mild-mannered statement was “right out of the union-busting playbook.” 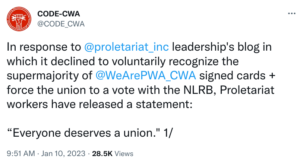 In a revealing lament, it said the company was “forcing” an election. This is reminiscent of union leader Bruce Raynor’s infamous quote that “there’s no reason to subject the workers to an election.” Here in the United States, anyway, we tend to prefer making decisions through elections rather than the alternative. 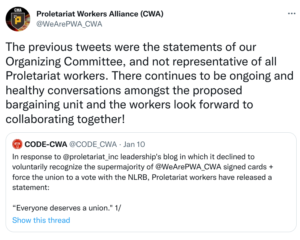