Update: After this post went live, the Gig Workers Collective posted a response on its Facebook page. The post describes an even closer collaboration with the UFCW than we documented below. The Collective acknowledged that the union “directly [paid] Facebook for our newly launched ads” and has been “granted…access to our facebook (sic) page.” The Collective also said the UFCW “temporarily directly [hired] two of our long term volunteer organizers to help with the duration of the No On Prop 22 campaign.”  The Collective’s post argues that the UFCW managing and paying for its Facebook ads, as well as paying two of its organizers, does not compromise its independence from the union. Readers can decide for themselves whether this explanation adds up.

The Gig Workers Collective’s cozy relationship with the UFCW was revealed through Facebook’s “page transparency” feature. The UFCW International in Washington, DC, is the sole entry on the list of “Organizations That Manage This Page.” UFCW is said to be “responsible” and has “claimed responsibility” for the Collective’s Facebook page. A phone number on the page connects to the UFCW’s press office in Washington. Presently, the Gig Workers Collective is running sponsored Facebook ads related to California’s Proposition 22 that say “Paid for by the United Food and Commercial Workers Union.” The UFCW is one of the top-three funders of the opposition campaign to Proposition 22, and has sought to organize workers in the gig economy. 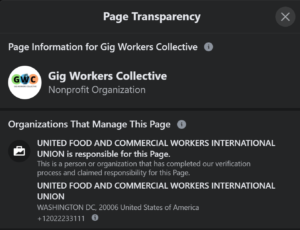 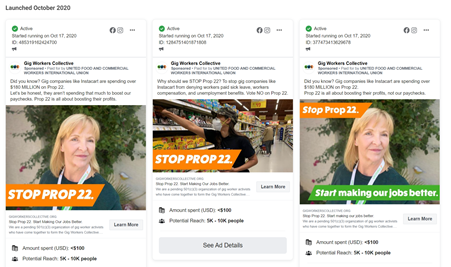 Members of the Gig Workers Collective have in the past denied being funded by the UFCW. Matthew Telles, an early member, said in February of this year that he is “not paid by the ufcw (sic) or anyone else for that matter.”

While that may have been true at the time, the UFCW and other labor groups have been repeatedly connected to the Collective’s activities. This spring, Gig Workers Collective founder Vanessa Bain described “support from the UFCW and other partners” as being “crucial” to its mission. The Collective’s members have in the past worked extensively with Working Washington, a worker center backed by the SEIU that manages a national campaign to organize the gig economy. (Working Washington is the subject of an extensive complaint with the Office of Labor-Management Standards.)

This isn’t the first time a purportedly “grassroots” worker group has been revealed to have union ties. The so-called Fight for $15, launched in 2012, was portrayed as a series of grassroots worker strikes; later financial reports filed with the Department of Labor revealed that the SEIU funded the protests, paid for public relations, and even used its fronts to make direct payments to the strikers.

Filings available next year with the Office of Labor Management Standards will provide greater detail on the UFCW International’s funding commitment. For now, the Gig Workers Collective deserves a permanent asterisk next to its “grassroots” description. As with other such groups, look for the union label.