Labor unions are accustomed to campaigning for workers’ rights. This fall in California, the script is flipped: They’re opposing a ballot measure that cements the status of gig workers (think DoorDashers or Uber Drivers) as independent contractors. Labor’s problem is that gig workers don’t want what it’s selling; by a 4-to-1 margin, they want to retain their current employment flexibility rather than be forced to become full-time employees.

Lacking the worker representatives to back them up, unions have turned to an old standby: Biased research designed to tell them what they want to hear. The study in question comes from the University of California-Santa Cruz. Union-backed groups like Gig Workers Rising call it “the most comprehensive survey of actual [gig] work done.”

The survey suggests — contrary to other available data — that most gig workers have a full-time (30+ hours weekly) schedule, and earn “poverty level” wages. 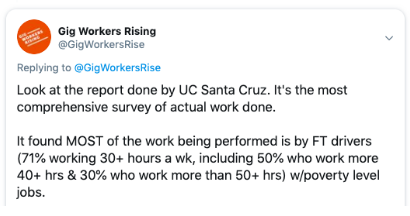 But documents obtained via a public records request show that the study was explicitly designed by labor groups to support gig worker organizing. Survey respondents were provided by (and paid by) the same labor groups who want to organize gig companies. And the final product fell far short of its initial goals, such that the project administrator called it “not representative” of the experiences of gig workers.

The Santa Cruz report originated from a project sponsored by a city commission in San Francisco–the Emerging Mobility Services Labor Study. At the outset, the study sought to investigate “the [gig] companies’ labor models” and conduct “the largest survey of demand workers in the U.S.” The labor group Jobs With Justice was “leading” the project–both “survey outreach and field operations”– according to a description by the city administrator. (Jobs With Justice is a labor group funded by unions that, among other goals, focuses on organizing gig workers.) UC Santa Cruz researcher Chris Benner, who’s worked extensively with unions in the past, was brought on to provide assistance.

Email where Jobs With Justice is described as “leading” the project. 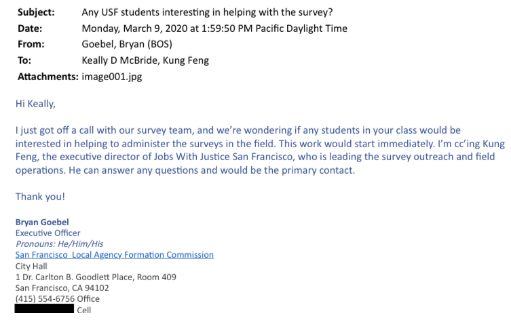 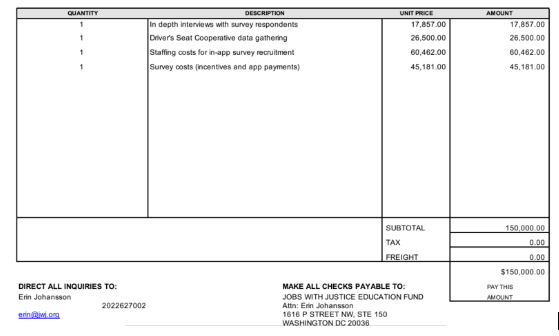 Earlier this year, the project was altered to track the impact of the COVID crisis on gig workers’ experiences. UC Santa Cruz’s Benner described the rationale in a recent interview:

Jobs with Justice drafted the new survey questions, with answers designed to “support organizing.” It sent them to Benner and others for review; the team also discussed engaging with SEIU Local 1021 and its “driver organizer” to distribute the survey.

Jobs with Justice drafted the survey.

Email records show that the project fell short of the researchers’ expectations: While the city administrator responsible for the study promised 500 responses in the gig survey, the final product contained just 219 responses.

Pitch email sent to a reporter that describes the study goal as including “500 workers.”

Project Description that says 500 responses is “not representative”

If a 500-response survey is “not representative” of gig workers’ true experiences, then a 219-response survey has no credibility in describing what it’s like to be a gig worker. That’s especially true given that the researchers’ internal data shows 40 percent of survey respondents didn’t provide the app company they “gig” for–suggesting they might not be gig workers, period. Sample sizes were abysmally low for delivery companies. 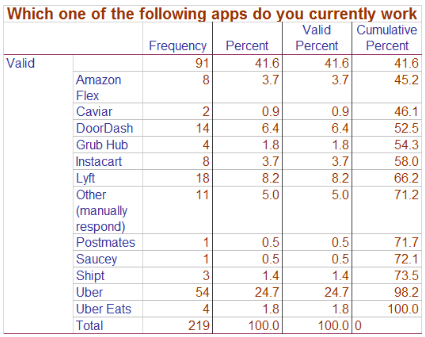 It’s not just the survey text and sample size that are flawed: Study participants were also offered a $10 gift card by Gig Workers Rising–which, these records show, was in direct violation of what lead researcher Chris Benner advised. (See below.) He said even a $5 payment “leaves open lots of opportunities for people to game the system.”

Even on the day the survey was released, Gig Workers Rising and Jobs With Justice were conducting a paid “social media push” to try to boost the respondent count.

Benner worries that payment for survey participants compromises the project. 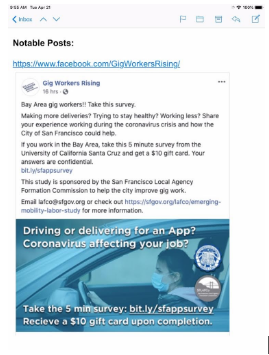