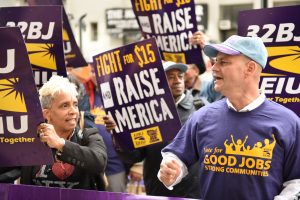 Over the weekend, McDonald’s announced that its CEO Steve Easterbrook would be leaving the company, following a “consensual relationship with an employee that violated company policy.”

If Easterbrook violated the rules, McDonald’s was right to ask him to leave. What’s not right is how the Fight for $15 movement — which is spearheaded by the Service Employees International Union (SEIU) — has jumped on this opportunity to decry McDonald’s culture as “rotten from top to bottom.” Fight for $15 has no place slinging accusations against another organization, given the sordid behavior of its own staff.

A recent investigation into workplace harassment at the Fight for $15 led to the resignation or firing of four officials, including SEIU Vice President Scott Courtney, Fight for $15 organizing director Kendall Fells, and the head of the campaign’s Detroit chapter Mark Raleigh. A union spokeperson said the high-level staff changes were the next step in the investigation, “which brought to light the serious problems related to abusive behavior towards staff, predominantly female staff.”

Over a dozen staff members interviewed about the situation said “complaints about top-level staff on the Fight for $15 campaign, including Executive Vice President Scott Courtney, were an open secret.” Apparently, reports of “abusive and aggressive behavior…led to no action.”

It doesn’t end there. In an ongoing lawsuit against the SEIU’s largest local, its vice president Dave Regan is accused of “sexual misconduct and assault” by a former union employee. Another employee has stepped forward to relay similar accusations. She was fired for speaking out.

Regan has reportedly made it known that any potential whistleblowers should think twice before speaking out against him or the union. Unfortunately, that’s just the tip of the iceberg when it comes to accusations of sexual misconduct against the SEIU and its Fight for $15 movement. Perhaps the union should worry about the skeletons in its own closet before going after other organizations.