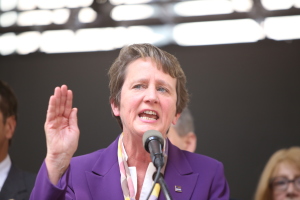 Uh-oh, SEIU. In the wake of the Harvey Weinstein scandal, the Service Employees International Union (SEIU) has a sex-related problem of its own. Executive Vice President Scott Courtney, who had led the union’s job-killing Fight for $15 minimum wage campaign, recently resigned from his post after complaints surfaced about his relationships with female staffers. BuzzFeed’s Cora Lewis reports:

More than a dozen current and former staffers interviewed by BuzzFeed News said complaints about top-level staff on the Fight for 15 campaign, including Executive Vice President Scott Courtney, were an open secret, and that complaints about abusive and aggressive behavior by some organizers who reported to Courtney led to no action.

Not ideal. Earlier this month, Courtney married a subordinate of his, whom he courted on the job. Courtney’s resignation also raises questions about the SEIU’s reported inaction when faced with sexual harassment allegations, not to mention retaliatory tendencies.

And he’s not alone. The union had to fire the leader of its Fight for $15 campaign in Illinois, Caleb Jennings, as part of an investigation into misconduct and abusive behavior. Jennings allegedly grew violent toward his employees, and even reportedly shoved a female subordinate against a door frame. The SEIU also placed Mark Raleigh, the Detroit campaign’s top official, on administrative leave for similar reasons.

This is ironic given, in the union’s words, the SEIU’s ongoing “[fight] for justice for working families, immigrants, women, people of color, LGBTQ people and people of all faiths and backgrounds in their work places.” Even more ironically, the Fight for $15 has repeatedly vowed to reduce “rampant sexual harassment in fast food restaurants.” It probably makes more sense for SEIU officials to get their own house in order before casting broad aspersions.

Unfortunately, sexual misconduct may transcend the service union. As other labor groups face similar allegations, there is talk of cover-up and rampant retaliation. According to the Payday Report, “Several union officials under investigation by other labor reporters have threatened to sue if reporters print allegations.” In labor reporter Mike Elk’s words: “I have had to personally chaperone younger female labor reporters on drinks with sources because of how intimidating some men in the labor movement can be.”