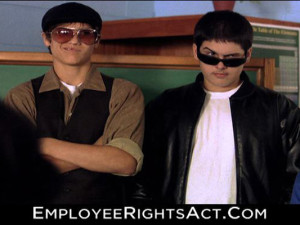 The National Labor Relations Board (NLRB), stocked with appointees loyal to Big Labor, has made a series of rulings and procedural changes that have eased the ability of union organizers to win unionization elections over the past few years. Bloomberg BNA conducted an analysis of union elections from 2015, and found that the board’s favors to Big Labor are paying handsomely for Richard Trumka and his cronies.

The board held 1,628 representation elections last year—a five-year high. And unions won 1,128 of them—a ten-year high. Unions prevailed in 69.3 percent of NLRB elections in 2015. That’s down slightly from a year earlier, but still the second-highest win rate since we started keeping records more than 20 years ago.

BNA also found that the trend of unions winning more often when bargaining units were smaller continued. In bargaining units of fewer than 50 employees, BNA researchers found that labor unions won 73 percent of all elections held. This shows the potential advantages that Big Labor got when the NLRB enabled “micro-unions” in its Specialty Healthcare ruling, where  unions only need to convince one section of a shop to unionize rather than all related employees.

It probably gets worse. A separate BNA analysis of part-year data from after the “ambush elections” rule (which shortened the time period for union votes and gave union organizers far more personal contact information for employees) found that unions were winning a higher percentage of a greater number of elections compared to the same period from the year before.

The NLRB changes are an attempt by the Administration to give Labor what it couldn’t get through Congress in 2009-10. It’s time for Congress to move on the Employee Rights Act and push back on behalf of employees.