Wage Hike not Good Enough When the Goal Is a Union 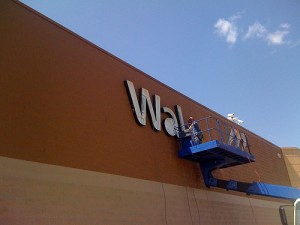 Earlier this week, Wal-Mart issued a directive raising base pay at the company’s stores to $9 per hour for new hires and $10 per hour for current employees. If the complaints of the “Organization United for Respect At Walmart” (OUR Walmart) were really about the company’s pay being too low, you might expect at least a grudging acknowledgment that employees’ situations would be helped some by this private action.

But OUR Walmart isn’t a grassroots effort to raise pay: It’s a well-connected union-organized campaign that will never be satisfied until Wal-Mart has agreed to “neutrality” (unions’ P.R.-tested name for public card check) and employees are dues-paying members of the United Food and Commercial Workers (UFCW). (To wit: The UFCW wouldn’t put $240,614 into a media blitz for its campaign unless it expected to get a return.)

And when potentially millions in dues money is on the line, no compromise is good enough. In fact, the goal posts must move. The New York Times reports on where they’re going now:

With some progress on the hourly wage front, labor activists are highlighting another longstanding demand: more hours — and more consistent hours — for hourly-wage workers like Mr. Rodriguez, something they say will make as much a difference to workers’ pocketbooks as an increase in wages.

(Funny—we can remember a time when unions restricted workers’ hours so that more people were employed to cover all shifts. Of course, that was for an already-unionized business, so more people employed meant more people paying dues.)

Because Wal-Mart has independently acted to alleviate one UFCW front group complaint, another comes to the fore. It’s a clever strategy that unfortunately might snooker media outlets that already breathlessly (and incorrectly) reported that OUR Walmart’s protests were “strikes”—when, in reality, a meaningless number of employees were walking off the job.