The Center for Media and Democracy (CMD) is a left-wing organization that is a critical cog in the Wisconsin liberal-progressive infrastructure network. The group has taken significant funding from major labor unions in recent years—in 2013, $118,000 in identifiable union expenditures to CMD amounted to 13.6% of the organization’s contribution and grant revenue.

Prior to Republican victories in Wisconsin in 2010 that led to Gov. Scott Walker’s reforms to public-sector collective bargaining, CMD stated that it did not take union funds. But according to a Center for Union Facts analysis of the Internet Archive cache, CMD reversed its position on accepting union funds almost immediately after Walker won election to the Wisconsin governor’s mansion and Republicans won control of both houses of the state legislature.

CMD, which criticizes conservative groups for a lack of transparency, does not disclose this union funding in its annual IRS filings or on its website.

CMD claims to be an advocate for transparency and openness in government and reduced special-interest (specifically business) influence; to that end, the group asserts, “CMD does NOT accept grants from corporations or government agencies.”

This does not mean that CMD receives most of its support from grassroots supporters: According to an analysis of the organization’s 2013 tax return which was recently filed, CMD’s six largest ($25,000 or more) contributors — which appear to include the American Federation of State, County, and Municipal Employees and the Service Employees International Union — account for 72% of CMD’s grant and contribution revenue.

CMD once had a more restrictive contributions policy, proudly asserting as recently as 2010 that it “does NOT accept corporate, labor union or government grants.” In a 2009 posting for the group’s top job, the organization claimed, “CMD does not accept grants from corporations, labor unions or government agencies,” as in the screenshot below.

Using the Internet Archive “Wayback Machine,” which caches pages on the internet, we can determine when Center for Media and Democracy changed its stated position on its “Financial Supporters” page (which no longer exists, having been rolled into an “About Us” page).

As of the publication of this brief, CMD — which purports to accept “donations from individuals and philanthropic foundations through gifts and grants” and lists what it purports to be a list of past and current foundation funders — does not explicitly acknowledge that it receives significant funding from labor unions. The screenshot below shows CMD’s “disclosure” of funders as of December 2014. 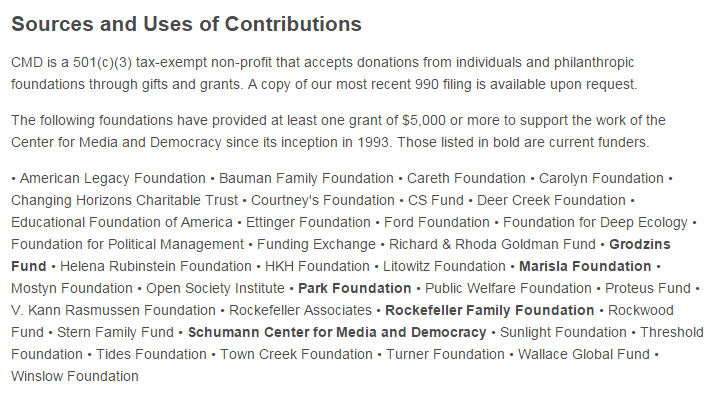 In 2010, the Wayback archives show two captures of the “funders” page after the November 4 elections (which flipped “trifecta” control of Wisconsin state government from Democratic to Republican). The November 26th capture has the following text:

On December 20, that had changed to the following:

The statement that CMD would not take money from labor unions quietly disappeared. It is unknown precisely why this occurred, although the closeness to the 2010 elections cannot be ignored. A Google search of the Center’s website (PRWatch.org) shows almost no mention of Gov. Walker prior to January 1, 2011. By February of that year, CMD released a lengthy “special report” on the Governor’s relationship with a conservative foundation.

By no later than May 2012, CMD was receiving significant sums from the AFL-CIO, according to Department of Labor filings. It is possible that CMD received union funding closer to the time it changed its stated policy: Under the 1959 Labor Management Reporting and Disclosure Act which governs DoL filings, only national union federations and unions with private-sector nonagricultural members must file financial disclosures. The Wisconsin Education Association Council (Wisconsin’s NEA affiliate and largest teachers’ union), for example, is exempt from such reporting.

Since that time, CMD has additionally received funds from AFSCME and SEIU, in addition to subsequent money from the AFL-CIO.

CMD claims to represent a grassroots progressive liberalism opposed to business-backed conservatism. However, its funding indicates that it carries out the agenda of liberal special interests—environmentalist and left-wing foundations and public sector labor unions like AFSCME and SEIU. This tie into the Democratic network grew after two events: the appointment of former Clinton Administration and Pat Leahy aide Lisa Graves to head CMD in 2010 and the election of Scott Walker as Governor of Wisconsin in November of that year.

The evidence clearly shows that whatever was keeping CMD from taking union contributions while Wisconsin was governed by Democratic Gov. Jim Doyle, it was not principle.