Randi Whips Another “Reformer” Back Into Line 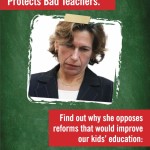 Today’s Wall Street Journal editorializes against the decision by Rhode Island Treasurer Gina Raimondo to divest the state pension funds from Third Point LLC, a hedge fund run by a prominent charter school supporter, Daniel Loeb. The Journal notes that one of America’s leading opponents of reforming schools is behind the scheme:

Mr. Loeb and his wife are big donors to charter schools, which is enough by itself to earn the wrath of AFT President Randi Weingarten.

But the AFT put Mr. Loeb high atop the union’s hedge-fund black list last year because he also sits on the board of the New York chapter of StudentsFirst, Michelle Rhee’s education reform outfit that advocates teacher accountability in part based on student achievement. He is also a trustee of the Manhattan Institute, which favors school reform and in 2011 honored . . . Ms. Raimondo.

The move is largely a political play by Raimondo, who is running for Governor, to regain favor with Weingarten and the teachers union that she lost by pushing a necessary and broadly successful pension reform in Rhode Island. The Journal editors don’t think her gambit will work:

But Ms. Raimondo is fooling herself if she thinks that divesting from Third Point will atone for her pension-reform heresy. The unions will still try to end her political career. Ms. Weingarten wants to make an example of Ms. Raimondo by showing other Democrats that favoring pension reform is politically fatal.

If Raimondo falls to the union pressure, she would be the third prominent reformist Democrat Randi Weingarten unmade in the name of preserving her cushy, failed status quo. Former New York City Councilwoman Eva Moskowitz, who called hearings to shine the light on ridiculous provisions in the city’s teachers contract, saw the United Federation of Teachers (then led by Weingarten) heavily back her opponent in a City Comptroller bid. The result? According to then-Schools Chancellor Joe Klein, would-be reformers in New York politics got skittish, telling him behind closed doors: “I agree with you [on reforms], but I ain’t gonna get Eva’d.”

More famously, the Washington, D.C. local of Weingarten’s AFT went hard after then-D.C. Mayor Adrian Fenty, the political patron of reformist Schools Chancellor Michelle Rhee. Like Moskowitz, the AFT sent Fenty (and Rhee) packing. For all Weingarten’s “reformer” posturing, one thing is clear: The real motto of AFT might as well be, “Nice political career you have here…shame if anything happened to it.”