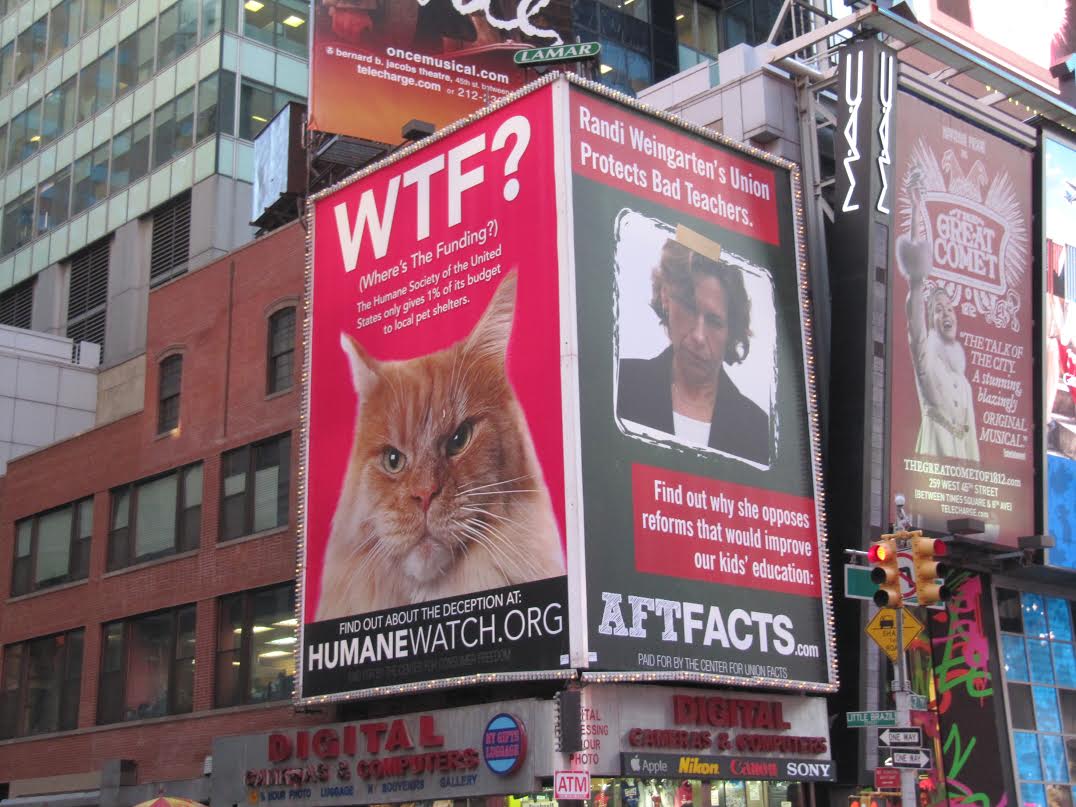 Washington, D.C. – As part of its ongoing campaign against the toxic effects of teacher unions on U.S. education, the Center for Union Facts has placed a billboard in New York City’s Times Square and is running a 60-second radio ad on several NYC stations calling out the American Federation of Teachers (AFT) and its president, Randi Weingarten, for contributing to America’s education decline. The ads focus specifically on how the powerful teachers union protects incompetent teachers at students’ expense, and refuses to reward excellent teachers with higher pay.

The Times Square billboard, located at Broadway and 46th, features a picture of AFT President Randi Weingarten with the text, “Randi Weingarten’s Union Protects Bad Teachers.” The billboard then prompts viewers: “Find out why she opposes reforms that would improve our kids’ education: AFTFacts.com.”

The radio ad begins with kids in their school classroom asking, “Hey, what’s that elephant doing in the classroom?” and “How am I supposed to get a good education with this elephant in the way?” Switching to a narrator, the ad continues: “It’s time we talked about the elephant in our kids’ classroom: Teachers unions. Our students have fallen behind countries like Latvia, Estonia, and Vietnam in math and science, and it keeps getting worse. Powerful teachers unions continue to protect incompetent teachers from being replaced, and refuse to reward good teachers with higher pay.

“Randy Weingarten, the head of the American Federation of Teachers, has been stalling reforms that would help fix these problems and give our kids the opportunities they deserve. Weingarten and her union need to start embracing major changes so that our kids and our country can compete internationally.” The ad concludes by prompting listeners to learn more at AFTFacts.com, a website operated by the Center for Union Facts dedicated to exposing the corrosive effects the nation’s second-largest teachers union has on education.

“The American Federation of Teachers can go on pretending it’s all about the kids, but after decades of scholastic underperformance it’s clear that it’s nothing but a charade,” said Richard Berman, executive director of the Center for Union Facts. “The American public is wising up to the truth: Randi Weingarten’s first priority isn’t to improve the quality of education – it’s to protect poor-performing teachers and the lackluster status quo.”

Berman concluded, “Students in New York City and across the U.S. deserve an education that focuses on giving them the tools they need to succeed, not one that protects incompetent teachers at their expense.”