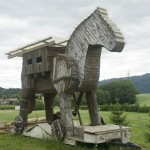 As we told Wall Street Journal readers from the front page today, unions are employing new tactics in their endless quest for employees’ dues money. As our managing director told readers, new “workers centers” are “a far more potent strategy than unions have used in the past.” They entice workers with promises of language classes, citizenship, and better wages in exchange for striking, disrupting business activity, and ultimately unionization drives. Simply put, workers centers are Trojan horses used to ease a union into the workplace.

The percentage of private sector union membership has been cut in half in the past two decades and labor is scared. They have turned to organizing workers centers, which are able to use unorthodox picketing tactics and “create strife and conflict within a company” to pressure employees and employers without actually bargaining on behalf of the employees. Workers centers also receive substantial funding from labor unions. For example, the SEIU gave $2.5 million to New York Communities for Change during the same time that the group began to pressure restaurants, compared to NYCC’s pre-campaign budget of $2.1 million.

Workers centers can be found in areas that unions don’t usually reach, such as the South, “big box” stores, or the general service industry. In New York, the New York Taxi Workers Alliance claims 17,000 members and affiliates with the AFL-CIO in exchange for a membership fee. Workers centers such as OUR Walmart have been trying to organize the holy grail of chains, Walmart, for years.

This WSJ article profiles the organization of a car wash company. The New York Communities for Change is working to organize the 200 carwashes in New York City and with that, approximately 5,000 workers. The organization has already filed for six union elections and won two of them.