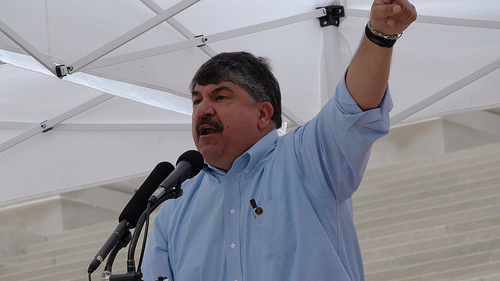 Although labor hasn’t officially asked for “payback” this time around, it’s clear that unions intend to be heard on where they stand on the so-called “fiscal cliff.” Labor and its supporters have long fancied themselves as the keepers of the working people, and it appears that unions will take up that mantle again in the coming weeks.

Labor leaders and progressive activists met with President Barack Obama on Tuesday for an hour to discuss what they want to see in the end-of-year budget deal in Congress. While Republicans and the Chamber of Commerce talk about compromises that they are willing to make, labor is pushing President Obama to draw a line in the sand.

It was certainly labor’s big day in the spotlight, and one can only imagine how much the AFL-CIO’s Richard Trumka loved the attention he got from a gaggle of reporters hanging on his every word. One report said that Obama was in “listening mode” while some of his largest financial and philosophical supporters laid out their demands. Chief among those are keeping entitlement benefits static and raising taxes on the rich. And Trumka plainly stated that he would oppose any increase to the Medicare eligibility age, and that no progress had been made on that front.

The ink is barely dry on the I.O.U. from Obama to labor, but it looks like it might be time to start paying. At least one expert has said that Obama “owes them big time.” And Larry Hanley of the Amalgamated Transit Union said last week that “Barack Obama has owed a debt to labor and will continue to owe a debt to labor.” Trumka’s tone indicates that Obama’s debt to him might be bigger than the national debt.

By this morning, it appeared that Obama would be coming in hard on the “cliff” negotiations: he’s proposing double the amount of revenue generation than he proposed in last year’s drawn-out budget battle. He’s slated to meet with business leaders today, but it looks like he already reached some conclusions yesterday after just hearing from labor and liberal activists at the Center for American Progress and MoveOn.org. It’s a sign that Obama’s tone has rapidly changed from his election night victory speech, when he talked about greater cooperation in Washington.

After falling short in pushing through EFCA in his first term, perhaps Obama meant that he would better cooperate with labor to deliver what it wants.