Want to Help? Join the Union 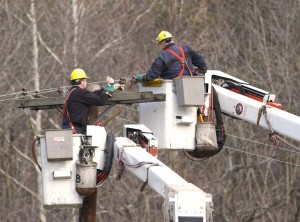 President Obama’s plea for “no red tape” in the response to Hurricane Sandy was a memo that the electrical unions in New York and New Jersey might have missed. New documents appear to reveal labor’s interests in keeping the red tape tangled.

Electrical utility workers from Alabama, Florida, and Georgia have all complained that they faced delays, confusion,  and miscommunication that forced them to turn around and head home before they could help the storm-ridden communities.

Decatur Utilities in Alabama said that its crew turned around once the utility was given documents that seemed to indicate that the crew had to join the union in order to get to work in New Jersey.

Elsewhere, a central Florida utility lineman complained that his crew was given a 300-page document to decipher before starting to work on Long Island. He told the Daily Caller, after idling for over a day:

“It turns out there was a 300-page contract that the union controlling LIPA [the Long Island Power Authority] wanted everybody to sign first. We don’t have time for that. We’ve got guys ready to go. You need lawyers for this.”

Diverse Power from LaGrange, Georgia said that it had crews in Maryland, but when they made it to New York, they were asked to sign union contracts. The crew turned around and returned home.

Union officials have continued to deny these reports, but the Daily Caller said that it received these documents from the Florida Municipal Electric Association that were allegedly sent to it by International Brotherhood of Electrical Workers (IBEW) Local 1049. Some of the highlights include the requirements that the assisting utility companies:

If these documents are authentic, it’s clear that the union is looking to protect itself against non-union workers from the South and hold up the recovery — and skim a bit off the top.

Since then, however, Local 1049 has backpedaled:

Barry Moline, the association’s executive director, told TheDC that by Nov. 1 the union, based in the central Long Island town of Hauppauge, had relented and stopped insisting that nonunion crews pay dues and other union fees.

“The union director” himself placed a phone call to withdraw the letter, Moline said during a telephone interview Saturday. But that came only after Moline had notified a national trade group, the American Public Power Association, which turned outrage into action.

The devastation in the northeast is incredible: there are some parts of the Jersey Shore, Staten Island, and the south shore of Long Island that may never be rebuilt. One of the largest power companies in northern New Jersey will not guarantee that the lights will be back on until Friday—roughly 11 days since the superstorm began to knock out power lines. (It doesn’t help that a nor’easter is forecast to hit the area on Wednesday.) Even when things are back to “normal” it will still be a different world for many people in the northeast.

But it appears that those residents can look for signs of normalcy in the way unions do business.  The mere existence of so much confusion is a cause for concern.There is always going to be some paperwork, but the petty union politics and maneuvering should be suspended. Are labor unions really worried that these short-term assignments given to out-of-state utilities will actually affect the local’s agreements?

President Obama was right: there should have been no red tape.