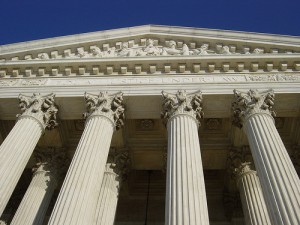 The case revolved around SEIU funding of ballot measure campaign groups in California’s 2006 initiative season. The SEIU wanted to see two of then-Gov. Schwarzenegger’s proposals defeated. One would have required public-sector unions to obtain employees’ affirmative consent before using dues for political activity and another would have given the governor more authority to cut state employee compensation. Both failed.

Under California law, public-sector workers in a unionized bargaining unit can elect not to join the union, but must pay for “chargeable expenses” related to collective bargaining activity. In the process of raising money to fund its campaign, the SEIU assessed what it called an “Emergency Temporary Assessment to Build a Political Fight-Back Fund.” The union required non-members in SEIU bargaining units to pay into the fund under the “chargeable expenses” rule.

Non-members who supported the Governor’s ballot initiatives sued the union to protect their First Amendment right to not support political activity with which they disagreed. The Supreme Court found that the activity was not a “chargeable expense,” and thus the SEIU was required to supply a “Hudson notice” that notifies non-members of their right to not pay into the union’s political fund. The Court ruled, “‘Lobbying the electorate,’ which the SEIU claims is chargeable, is nothing more than another term for supporting political causes and candidates.”

Furthermore, the Court ruled that the union should have erred in the interests of non-members who did not want to pay the assessment when considering whether to supply a notice. From the ruling:

If, as the SEIU argues, it is not possible to accurately determine in advance the percentage of union funds that will be used for an upcoming year’s chargeable purposes [non-political activities], there is a risk that un-consenting nonmembers will have paid too much or too little. That risk should be borne by the side whose constitutional rights are not at stake. If the nonmembers pay too much, their First Amendment rights are infringed. But, if they pay too little, no constitutional right of the union is violated because it has no constitutional right to receive any payment from those employees.

The high court also ordered that:

Therefore, when a public-sector union imposes a special assessment or dues increase, the union must provide a fresh Hudson notice and may not exact any funds from nonmembers without their affirmative consent.

Though the Knox ruling only applies to public-sector workers, but it is heartening that the high court recognizes employees’ rights to not be coerced by a union into supporting the union’s politics.