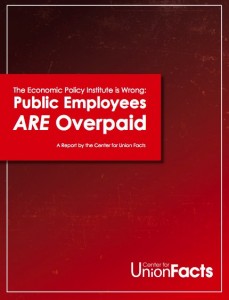 Today, the Center for Union Facts released a new analysis proving that public sector employees, on average, earn five percent more in wages and benefits than their counterparts in the private sector. This flies in the face of data from the Economic Policy Institute (EcPI), a “think tank” that has taken millions from labor unions and has released a series of studies making the counterintuitive claim that public sector employees are underpaid by four percent when compared to those in the private sector.

Redoing the same analysis from EcPI’s study, the Center for Union Facts controlled for two key factors that EcPI improperly accounted for: private sector business size and the treatment of full-time, part-year workers (a category that includes roughly one quarter of all teachers). When those two factors are properly considered, the results reverse themselves: public sector, taxpayer-funded employees actually enjoy a compensation bonus of at least five percent.

“We have been hearing for months now about the underpaid public sector workers from outfits that are funded by public sector unions, an obvious conflict of interest,” said Rick Berman, the executive director of the Center for Union Facts. “Unfortunately, the study’s author made two key errors, both of which coincidentally skew the results in the direction that labor unions support.”

The argument that public workers are underpaid has been made in order to deflect attention from public pay in states that are experiencing multi-billion dollar budget gaps.

“The Economic Policy Institute study assumes that every state employee would otherwise be working in a large private sector business  with 1,000 employees or more,” Berman explained. “Using this assumption is like saying that every computer tech in the state capital would qualify for a job at IBM – it’s bogus, and it creates a fictitious gap in wages that EcPI was more than happy to exploit for political gain. They also excluded full-time, part-year workers like certain teachers and recent retirees, another move that inflated that false deficit.”

Berman continued: “And that doesn’t even include other unaccounted for factors, like the ironclad job security in the public sector and the fact that most teachers’ full-time salary covers a work year only 36 weeks long. In times of economic distress, we all have to give a little back; public sector unions can’t hide behind the false pretense that their members are ‘underpaid’ any longer.”