Is there a coming class war between public-sector workers and private-sector workers? Here’s William McGurn in the Wall Street Journal: 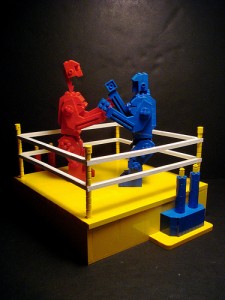 The notion that Wall Street and Main Street are fundamentally at odds with one another remains a popular orthodoxy. So much so that we may be missing the first stirrings of a true American class war: between workers in government unions and their union counterparts in the private sector.

That led Mike Elk of the pro-labor In These Times to wonder if just such a class war is happening with unions in New York City. He elaborates:

However, Gary LaBarbera, the president of the Building and Construction Trades Council of New York recently signed on to the Committee to Save New York, a coalition of business and real estate executives that seek to raise $10 million to raise a campaign in support of incoming New York Governor Andrew Cuomo’s plan to take on government employees in New York State by cutting wages and pensions.

Several New York City labor activists who spoke off the record said that LaBarbera is willing to take on public employees over pay and wages in order to free up money from the state budgets to go toward construction projects.

These conflicts are less visible at the national level where private-sector and public-sector union leaders are almost always in agreement with each other. But at the state level, where unions compete over a more limited pot of government money, the divisions are becoming much more stark. Both private and public unions agree that more revenue is needed, preferably from tax increases on the rich. But public-sector unions want that money to go toward lavish pension plans for government employees, while private-sector unions want more infrastructure projects to get their members back to work.

This is what happens when you tie your union’s success to the government, rather than working with businesses to create new jobs and opportunities. Eventually the money runs out.

Image courtesy of Profound Whatever.