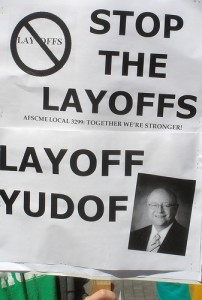 In a few hundred words, Charles Lane lays waste to the argument that $23 billion is needed to close the gap in school finances and save the jobs of hundreds of thousands of teachers. You really should read the whole thing — go on, it’ll only take a couple of minutes — but here’s a taste:

Start with that scary number of 300,000 teacher layoffs, which has been bandied about in numerous newspaper articles. The sources for it are interested parties: teachers unions and school administrators, whose national organizations counted layoff warning notices that have already been sent out this spring and extrapolated from there. Notably, however, even these sources usually describe the threatened positions as “education jobs” – not teachers. That’s because the figures actually include not only kindergarten through 12th grade classroom instructors, but also support staff (bus drivers, custodians, et al.) and even community college faculty. And 300,000 is the upper end of a range that could be as low as 100,000. Nationwide, there are about 3.2 million K-12 public school teachers. …

Given these facts, it’s unclear how the bill’s supporters came up with its $23 billion price tag. It works out to about $77,000 per job saved in the 300,000-layoff scenario, but $230,000 per job if only 100,000 jobs are at risk. Maybe that’s why the bill’s fine print allows states to spend any excess funds left over from education hiring on other state employees. By the way, the bill distributes funds to states according to how many residents they have, not how many threatened layoffs.

Emphasis mine, because it’s an interesting little tidbit. Why do you think the national unions are pushing for this bill? Sure, in part it’s because teachers unions are pretty powerful. But who do you think is going to benefit from those “excess funds”? In all likelihood it’ll be more public sector union employees…you know, like the ones in California that are likely to bankrupt the state.

Like I said, you should read the whole thing.