Seniority: obstacle to progress in education 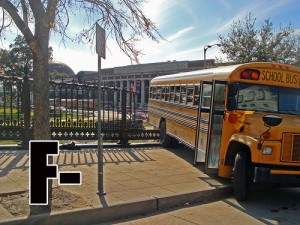 Layoffs are an unfortunate fact of life in times of economic strife. The public sector is no exception; with budget shortfalls hitting school districts around the country, some administrators are faced with the difficult task of deciding who to let go. The process is rendered vaguely absurd by the fact that seniority, and not competence, is the most important factor in determining who will stay and who will go in many school districts.

Cleveland’s superintendent is running headfirst into the seniority wall. Faced with a failing district but provided a glimmer of hope by superior charter schools, Eugene Sanders is having a hard time getting his way:

Sanders can’t captain reform unless he vanquishes onerous rules on seniority and other contract provisions that keep the district from dumping ineffective teachers.

Faced with a $50 million deficit, Sanders’ negotiating tactic has been a blunt club of threats that, if wielded, would ruin chances of reform: If teachers don’t accept pay cuts, he vows to lay off 546 classroom teachers, many of them new teachers in the district’s promising specialty schools, who lack seniority.

Those specialty schools are indeed promising, as a series in the Plain Dealer showed last week. Here’s their take on two of the schools and their success:

South and East, which will close next week, are large, traditional and failing. Ginn Academy and two schools at the John Hay Campus are small niche programs that have had success.

The Cleveland School of Science and Medicine and Cleveland School of Architecture and Design, both at John Hay, and all-male Ginn will present diplomas this weekend to a combined 171 seniors. The count would have been higher, but two seniors failed to pass all five sections of the state graduation test. …

Impending district layoffs, poised to take a high toll among the three schools’ hand-selected teachers, fuel the scorn. News accounts of the heavy hits cause surviving colleagues in other buildings to feel less valued.

Urban systems face a dilemma: Large high schools are ineffective, but smaller models can be expensive and need union consent for the flexibility that proponents say is essential.

Without changes to the seniority system, a successful school will be gutted and a failing one propped up. How is this fair to our children or their futures?