Teamsters Local 107 in Philadelphia scored quite a haul (before the nepotism charges, that is.) 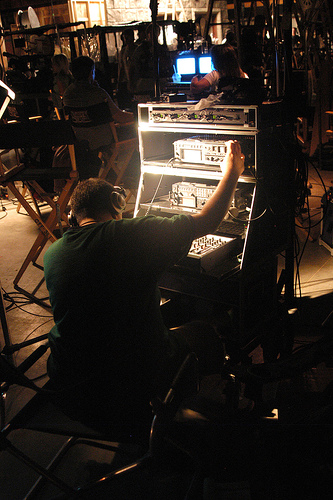 Teamsters Local 107 will not be able to continue to take advantage of its lucrative position placing Philly Teamsters on sets when movies–and movie stars–come to town. From the Philadelphia Inquirer:

It’s a chance to rub elbows with Hollywood stars. And make good money while doing it. For years, a select group of Teamsters Local 107 members have apparently been on a short list for high-paying jobs on movie shoots in the Philadelphia area. That may change. In response to an investigation alleging favoritism and nepotism in the local’s hiring process, the International Brotherhood of Teamsters has appointed an outside trustee to oversee job assignments within the movie and trade-show industries. […]

And, veteran union members say, there is always overtime. That’s one of the many perks. Gifts from movie stars are another. Jack Nicholson handed out expensive messenger bags after completing a recent project, according to one driver who said watches, shirts, jackets, and traveling cases have also been part of the booty that drivers have collected.

The working conditions aren’t bad, either. “Let’s put it this way,” said a veteran Local 107 member who asked not to be identified because of the ongoing controversy. “I made $150,000 last year, and I gained 50 pounds.” The driver, who estimated he worked about eight months on movies and trade shows, said union members were guaranteed meals while on a movie shoot. […]

…Local 107 officers, shop stewards, and movie captains have routinely assigned that work to friends and relatives rather than to union members with the most experience and service time. […]And once at a location to shoot a scene – which could last from a day to weeks – drivers get paid to sit and wait. “You take a book and a pillow,” said Frank Gizzi, a former Local 107 member who filed a complaint with the National Labor Relations Board over the local’s hiring practices.