NUHW calls out University of Maryland prof on “academic” letter 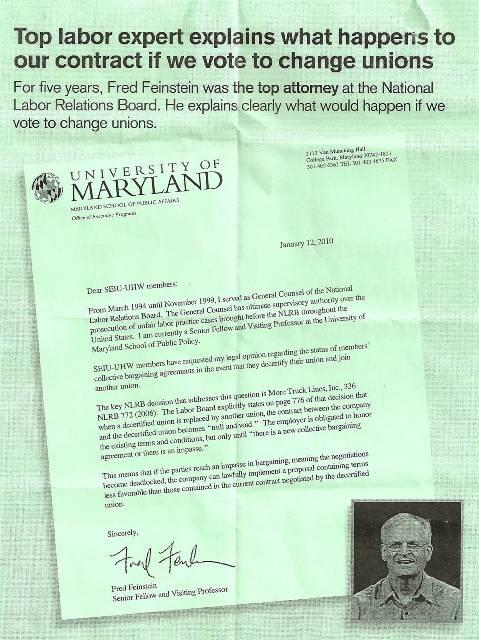 The NUHW is furious after a letter began circulating among California health workers implying they would have “less favorable” benefits, i.e., lose benefits like health care if they left the SEIU, according to the Baltimore Sun.

A professor at the University of Maryland, College Park is facing conflict-of- interest questions after he used university letterhead to deliver a legal opinion in his role as a consultant to a labor union. Fred Feinstein, an adjunct professor at the School of Public Policy, wrote a letter saying that California health care employees could jeopardize their contract benefits if they left Service Employees International for a competing union. Feinstein received $240,000 in consulting fees from SEIU in 2007 and 2008, which he did not mention in the Jan. 12 letter that was distributed as a flier in the continuing union battle. Officials of the rival National Union of Healthcare Workers say Feinstein implied that he was speaking for the university and thus compromised its academic objectivity.

The stakes could not be higher for the NUHW as they await election results in their battle with the SEIU to be announced Tuesday, according to the LA Times. The fact he was on the NLRB board, then consulted with the SEIU, and is now shilling for them against a union backed by the NLRB, further demonstrates the muddied waters of regulating big labor.