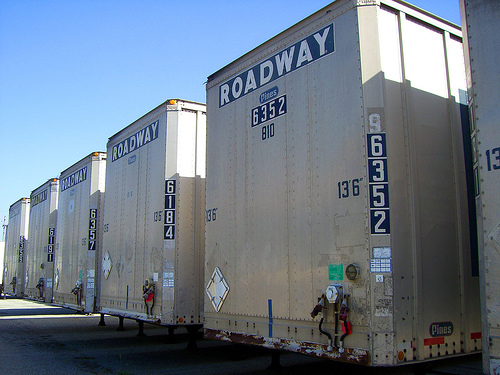 YRC has been on the skids for months, trying to finance, retool, sell, and buy its way off the edge bankruptcy.

At the end of 2009, all its cards played, YRC reached out to its bondholders to complete a debt-for-equity swap that would save it from the brink. If approved, bondholders would end up owning the vast majority of the company. But no one was approving, despite multiple extensions of the approval deadline.

The Wall Street Journal covers what happened next:

It’s here where YRC began to suspect that certain funds were holding out their consent, largely because they had CDS positions that were more valuable, says Mr. Green. In all, YRC and its advisers couldn’t convince—or even locate—owners of about $40 million to $50 million in notes to tender their holdings.  Their resistance was especially perplexing, said Mr. Green, because the company reckoned that bondholders would likely receive nothing in a bankruptcy filing.  As YRC saw it, a tiny group of holders held the fate of a company with 55,000 employees and annual revenues of about $9 billion in its hands. One problem was the opacity of the holders’ positions, said William D. Zollars, YRC’s chief executive. “It’s really difficult to tell who has CDS and how much they have. You can never be certain.”

Somewhere in the financial nether, someone was holding ALOT of YRC bonds, and thanks to this little trick of credit-default swaps, they stood to make alot of money if YRC went under. So the Teamsters, despite their own roll in dragging YRC to the brink, sprung into action…sort of. More from The Wall Street Journal:

Conditions grew so desperate for YRC that it enlisted the Teamsters in its effort to complete the bond tender. The Teamsters targeted a handful of bondholders, singling out the likes of New York hedge fund Brigade Capital. It planned a protest for Dec. 30 on Park Avenue. Brigade declined to comment. At the same time, the union secured the help of Pennsylvania state Treasurer Rob McCord, whose pension fund is an investor in Brigade. It’s unclear what effect Mr. McCord’s intervention had on the matter, but Brigade executive Don Morgan told Bloomberg on Dec. 29 he held no YRC bonds.  In a statement, Mr. McCord said “it was a great to have a chance to help.” The pressure paid off. By Dec. 31, YRC had enough bondholder support to complete its restructuring.

I should clarify that the Teamsters actually ended up canceling their protest against the hedge fund because of the bitter cold, but no one told the police officers who arrived at the scene for security, or The Business Insider who showed up to cover the “incident.” But the Teamsters threat was enough and whoever-it-was holding the bonds allowed the switch. The icing on this strange cake is that in the end even Goldman Sachs even pitched in to help the switch after Hoffa went on the offensive.

The YRC and Teamsters will live to drive another day.