It must be love: VP Biden and Teamsters share holiday card 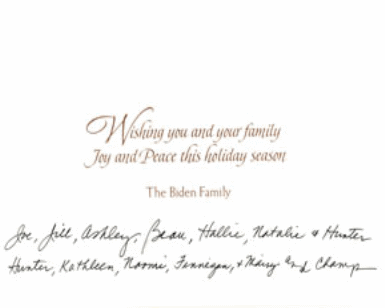 You know what’s so special about the holidays? Everyone can get their true feelings out in the open. Even Vice President Biden.

For the probably thousands of Delawareans who recently received Christmas cards from the vice president and his extended family (virtually everyone in the newsroom did), there’s a couple things that jump out. First is the disclaimer on the back that tells the receiver of “joy” and “peace” that the card wasn’t paid for by a Biden. It was paid for by the Democratic National Committee. And the card isn’t considered a card at all, actually, it’s a “communication” that “was not authorized by any candidate or candidate’s committee.” Not a very holidayish slogan for your holiday card.

But the most glaring omission from the card, something no god-fearing Democrat in Delaware would let happen, is the union printing bug. New Castle County Council President Paul Clark’s Christmas card has the union bug on the front. Tacky, to be sure, but at least it’s there. The vice president has no printers’ union bug on his card. But lest you think Vice President Biden has lost his collective union mind, the card does have the logo of the International Brotherhood of Teamsters. No mom and pop union print shop for the veep. Go Teamsters!

As soon as I get my hands on the part of the card with the Teamsters logo, I will pass it along.