Drawing a line in the sand: California’s showdown in the slowdown 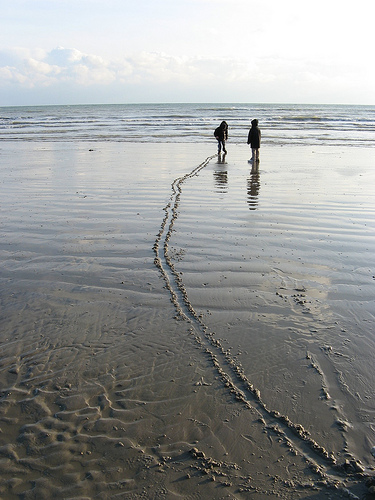 It was an epic showdown.  Words were said. Rumors were spread. There was much yelling and releasing of press statements.

The day of the fight was, however, a lot less interesting than the hype. California’s Columbus Day has been a point of much contention for months.  Lincoln’s Birthday and Columbus Day might as well be the birthright of every state worker in California, many of whom are part of the SEIU Local 1000.  It is one of 14 state holidays that Californians honor, while the average state only has 11. So Governor Schwarzenegger, in an effort to save the perpetually bankrupt state $26 million dollars, eliminated these two most holiest of holidays. State unions were wildly furious upset, and called on state workers to stay home in protest.

Several DMV offices closed, but state government escaped largely unscathed Monday from a Columbus Day contract dispute that had union leaders threatening to shut down operations. Government officials said the day was largely uneventful. “Of our 168 field offices, 164 opened and stayed open,” said DMV spokesman Mike Marando. While some offices in San Francisco scaled back services, he said, “This was largely a non-event.” Service Employees International Union Local 1000 offered a different assessment, saying eight Department of Motor Vehicles offices in Southern California and the Bay Area were closed. They said an additional 45 statewide opened late because of staffing shortages created by the union’s call for employees to take Columbus Day off. “It’s a victory,” Local 1000 President Yvonne Walker said.

While most state offices will not report how many people were absent until later in the month, the DMV estimated that about 560 of the DMV’s 4,300 employees were no shows, according to the San Francisco Chronicle. A handful of people had to wait in line longer at the DMV and were frustrated, but most people are frustrated at the DMV anyway.

Someday, California union-beleaguered citizenry will catch a break.  Unions are making sure that day is along time coming.