This should not come as a surprise 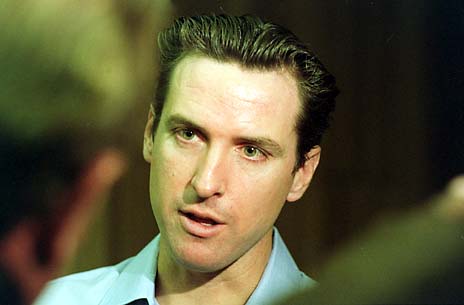 The mayor of San Francisco, Gavin Newsom, is the mayor of a large, liberal, and lovely city– a city that happens to have active, vociferous unions.

This is California, after all.

It just so happens that Mr. Newsom despises the local SEIU.  And they him.

Here’s a round up of the increasingly nasty confrontations between Newsom and SEIU Local 1021, events triggered by his layoffs of 500 clerical workers and nursing assistants over the summer.  The mayor’s office says the layoffs were due to the economic recession, and by all accounts, that is the case.  San Francisco, just like every corner of California, is seriously strapped for cash.

A evening reception for a police chief was forced indoors thanks to screaming SEIU protestors outside.  They held a die-in around his SUV in June.  There is even a story about union members throwing ketchup at his wife during a pride parade in Jun, however SEIU Local organizer Robert Haaland let the Chronicle know that among all these activities, the ketchup incident was not SEIU. These were collected last week by a blogger.

On the 29th of September, a union member approached the Mayor with a flier stating he had reneged on a deal with the union.  Newsom said it was a lie (which by all accounts it was), was furious, and said “I hate Robert” i.e. the organizer for the Local. Now the SEIU wants to file a complaint with the labor board of California for the incident, which will certainly endear them to Newsom even more. The next morning he arrived to work furious and said negotiations with the union had broken down.

Angry much? Newsom better get used to the attention from the SEIU.  They have sworn to follow him wherever he goes. From the San Francisco Chronicle:

Even the Monday appearance in L.A. with former President Bill Clinton? “That’s the plan,” Haaland said.

As Mr. Newsom makes a bid for governor of the State, this fight becomes all the more interesting.  Were he to be elected, he would probably feel entitled to follow in the footsteps of his predecessor, Governor Schwarzenegger, who takes great pleasure in burning the unions who have burned him. Perhaps the unions should find every possible gubernatorial candidate in the state and stage a die-in in front of their car.  That will surely help the unions push their agenda through. Not.