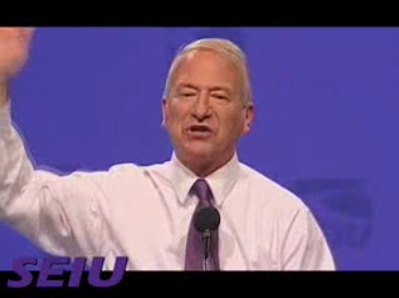 SEIU union boss Andy Stern won reelection yesterday at the union’s quadrennial convention. And like most other charismatic leaders, he also convinced the union’s rank-and-file to centralize the union’s power even further (I’m reminded of a few other world “leaders” that have pursued similar strategies). Now the SEIU will use nationwide industry bargaining councils rather than local union leaders to negotiate contracts.

The move advances what Mr. Stern calls his “justice for all” strategy of sometimes sacrificing pay gains for current union members in exchange for persuading employers not to resist organizing drives at some nonunion operations.

So, to all those SEIU members who have paid thousands of dollars in dues, hoping year after year for a pay raise: sorry.

Watch Stern talk about SEIU’s power (after talking about pizza)