Trumka Bringing Card-Check II to a Congress Near You? 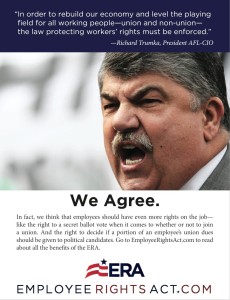 It hasn’t really gone anywhere. So now, as The Wall Street Journal reports, Richard Trumka and the AFL-CIO are plotting a new legislative initiative: “Collective bargaining”—in practice, unionization—for all, whether employees want it or not. The developing AFL-CIO plan would seem to force employers to collectively bargain with employee groups, regardless of how many employees actually were represented by them.

It’s yet another case of union leaders betting that making employees join unions will make them like unions. The SEIU is currently biting its fingernails waiting for the Supreme Court to decide if its scheme to shove unwitting home-healthcare workers into unions passes Constitutional muster, just after an identical game was rejected by Michigan legislators and voters. Similarly, Big Labor is hoping that the Obama-packed National Labor Relations Board (NLRB) will reissue the “quickie elections” rule that may force employees to vote on unionization before they’ve heard both pros and cons of organizing.

We see a pattern here, and so do Americans who want real labor reform. The Employee Rights Act, a package of seven reforms that empower and return rights to individual employees, is supported by over 80 percent of Americans in national polling. States from Indiana to Wisconsin to the labor heartland of Michigan have advanced pro-employee reform. Congress should reject Trumka’s latest shove ‘em in and milk ‘em dry gambit and advance the reforms in the ERA.