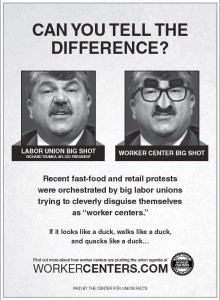 The New York Times recently covered the debate over “worker centers,” the latest incarnation of union front groups. Worker Centers like Interfaith Worker Justice (IWJ) and OUR Walmart — a subsidiary organization of the United Food and Commercial Workers (UFCW) union — continue to exploit a loophole in labor law. The National Labor Relations Act (NLRA) limits the length of unions’ organizational pickets to 30 days, but there are no such restrictions on ostensibly non-organizational campaigns. Worker centers offer unions the ability to conduct indefinite campaigns that may lead to future organizational efforts.

Our Executive Director was interviewed, and noted that the organizations are little more than pawns for union campaigns: “[Unions] put on a costume and call themselves something other than a union […] they’re doing Potemkin-village unionization.” IWJ responded on its own blog, whining that worker centers really aren’t unions at all. Interestingly, IWJ is heavily union-funded: Department of Labor filings show the UFCW paid $99,000 to IWJ. Probably not coincidentally, IWJ branding appeared on some materials associated with the UFCW-orchestrated anti-Wal-Mart demonstrations last fall.

Unlike traditional union corporate campaigns that attacked alleged shady business practices of the targeted firms, worker centers have an implied organizational aim. Some, like the fast food worker centers funded by the Service Employees International Union (SEIU), have even legally organized as unions, perhaps out of concern a court might order it. OUR Walmart officially disavowed an organizational aim to avoid possible federal sanctions.