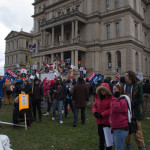 Yesterday, Michigan’s right-to-work law, which bans forced dues arrangements that lock non-members into funding a union they aren’t part of, took effect. New contracts will no longer require employees to pay a union they may never have had the chance to even vote on or be fired. As a Detroit News op-ed observed:

Workers will have a choice in union membership and labor unions will have to do what every other voluntary organization has to do: Earn their membership by service and not outdated work rules that force membership. […] If labor unions can evolve into service-centered organizations that compete for membership in this new labor environment they will survive and prosper. If not, they do not deserve government protection any more than any other outdated monopoly.

Unions tried to pull out all the stops to prevent these employee freedoms, including a preemptive ballot measure that would have enshrined the right to “collective bargaining” (translation: unions’ rights to collect forced dues) in the Michigan Constitution. They’re not giving up their chokehold on employees’ paychecks easily. Ten-year contracts, publicizing lists of employees who exercise their opt-out rights, and new ballot measure campaigns are all reportedly on Michigan unions’ table.   The Associated Press reports:

Multiple lawsuits have been filed to strike down the law. Legal challenges in neighboring Indiana have been unsuccessful. [Michigan Gov. Rick] Snyder said Thursday that right-to-work is “done” and “over with.” […]The law cannot be overturned directly in a referendum, yet unions could decide to back a 2014 ballot measure that effectively overturns it. The law’s backers expect that a ballot initiative is coming to coincide with the re-election bids of Snyder and GOP legislators next year.

Unions can rage against the decline of their movement all they like, but until they acknowledge the need for labor reform that’s not about dodging the rules (see the great “workers centers” rebranding and loophole-creation effort), that decline will continue. The proposals in the Employee Rights Act are supported by roughly 80 percent of union households. Maybe if unions endorsed them, more employees might find this real “new labor” worth joining.