SEIU Bigwigs Ask Where the New Members Are

Since 2012, the Service Employees International Union has been following an approach to stalling the decline of union membership in the private sector that centers on “fast food strikes” organized by public relations firms, worker centers, and proto-labor-unions called “worker organizing committees.” The basic idea? Phase one, make noise; Phase three, new union members.

The problem is phase two. Currently, SEIU leadership (including union president Mary Kay Henry) is satisfied to collect legislative wins, but the sheer rate of spending combined with real-world declines in union membership are leading some of Henry’s colleagues to start questioning how long the current plan can last. Bloomberg News quotes Henry’s predecessor, Andy Stern, raising questions about the sustainability of SEIU’s strategy:

Just as AARP relies on the money it makes in royalties from licensing insurance and other products, SEIU needs to find a funding stream to pay for its social-justice work, says Andy Stern, who preceded Henry as SEIU president. The union can’t just keep transferring revenue it makes from bargaining contracts to pay for its social justice work, Stern says, “because collective bargaining is shrinking.”

Indeed, since the “Fight for 15” started in 2012, an analysis of SEIU’s annual LM-2 reports with the Department of Labor shows SEIU has spent tens of millions of dollars—potentially as high as $80 million—with no substantial net gain in membership to show for it. Indeed, from 2014 to 2015, the union actually lost 5,800 members. 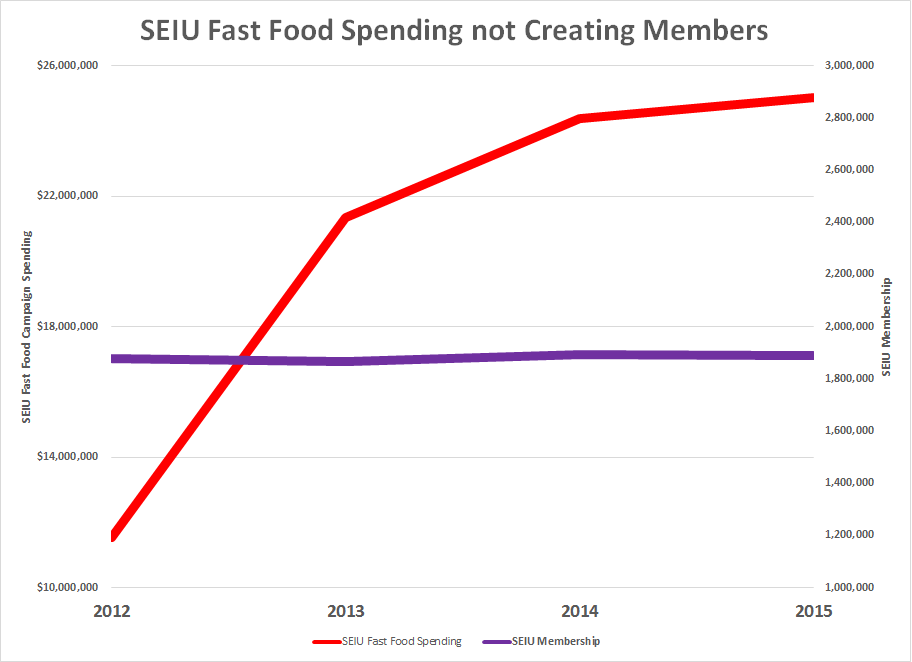 While the SEIU continues to bet that the union-packed National Labor Relations Board will open the door to an intimidation-laced card-check unionization of fast food employees, Henry allies are arguing that growing membership, collecting dues, and conducting collective bargaining is less important. But throwing large amounts of money for no new members and losing patience doomed the United Food and Commercial Workers’ OUR Walmart campaign, which split in two last year with considerable acrimony.

While SEIU’s effort has managed to ride off legislative and lobbying wins so far, it remains to be seen how long the union can continue to burn member dues without return on investment.