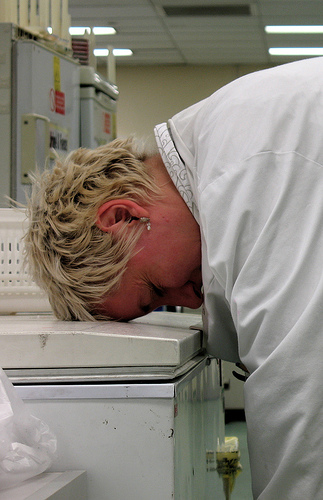 We noted reports from a few months ago that the United Food and Commercial Workers’ front group OUR Walmart might be dead, with the union cutting off at least some of its financial support. Those reports apparently weren’t the full story—the full story is even more entertaining.

A Wal-Mart Stores Inc worker group that has been one of the loudest voices pushing the retailer to boost wages and improve conditions has splintered over a disagreement about funding and strategic direction, according to people on both sides of the split.

Both wings are claiming the name OUR Walmart and vow to continue their work, moves that could sow confusion among supporters.

The “new OUR Walmart” officially re-launched late last week, to essentially no fanfare and much confusion. The splitters are literally the old OUR Walmart bosses: The former UFCW employees who used to run the original OUR Walmart are leading the effort. The funding source doesn’t appear that different either, with the rebels reportedly backed by a cattle-call of labor union-funded nonprofit groups including Demos, New York Communities for Change, and Interfaith Worker Justice (among others).

The UFCW, however, has other ideas—it intends to continue promoting a separate OUR Walmart campaign as the “true” OUR Walmart. Politico reports:

Meanwhile, UFCW tells us it will continue to fund its own, separate OUR Walmart campaign to improve pay and working conditions for Wal-Mart employees. There appears to be a dispute between the relaunched OUR Walmart and the UFCW about who possesses rights to that name. On the one hand, OUR Walmart has always been a nonprofit legally independent from UFCW. On the other, a source familiar with the UFCW campaign says UFCW still owns the trademark for OUR Walmart, including the campaign’s name, logo, website and Facebook page.

We have no idea whom to believe, as both sides’ allegations are fully in character for Big Labor. Hijacking the board and refusing democratic elections would hardly be unprecedented in the union movement. Indeed this year, federal regulators at the Department of Labor have entered 16 voluntary compliance agreements with unions that have improperly conducted their officer elections.

And it’s entirely plausible that UFCW cut funding for OUR Walmart—it wasn’t paying off. The new UFCW leadership quite plausibly wasn’t happy that OUR Walmart was sucking up money but not returning any of the union investment in union dues.

Far from the sign of a campaign on the right track, the “relaunch” of the splitter OUR Walmart is a sign that this organization effort hasn’t paid off for UFCW and that six-figure union organizers need somewhere to keep working. Meanwhile, union front groups are fighting each other.