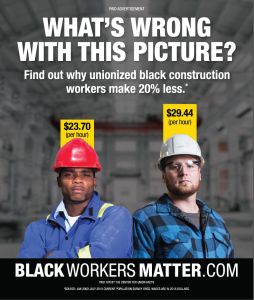 Since we began our campaign to draw attention to the disparities in pay between African Americans and white workers in New York City’s unionized construction industry, the Building and Construction Trades Council of Greater New York has been flailing in response. They’re relying on tired, old ad hominems against us, but we’re more interested in their talking points. Union supporters are trotting out the claim that union members working the same number of hours at the same jobs at the same rank get the same pay.

You’ll notice that the labor talking points don’t explain the stubborn fact that white construction workers in an analysis of Census Bureau data made $5.74 less per hour than black workers. When union bosses like Gary LaBarbera call collective bargaining “the great equalizer,” they dodge, rather than explaining the 20% difference in unionized construction pay.

In truth, collective bargaining isn’t much of an equalizer if black workers are shunted into worse jobs. The chart below shows some representative hourly pay scales according to contracts with some BCTC unions. The message? Apprentices—and remember, the first BCTC dodge to explain the difference was “look at how diverse our apprentices are”—don’t make much compared to journeymen and foremen. It looks like the better-paying jobs might not be equally available to black workers.

So, Gary, where’s the equalization? And that’s before questions are raised about the availability of hours to union members—there are allegations that white guys get more hours thanks to union internal politics. It’s easy to see, especially given the construction unions’ checkered history, how a little nepotism here, a little discrimination there, and a little backscratching for well-connected white union members could lead to the current disparities. Union talking points have only raised more questions about how we got here—they’ll need to do better than take potshots at their critics and answer questions about the racial pay gaps in union construction.