Less than a week after we highlighted this fact in a full-page newspaper ad, the BCTC reacted with an ad of their own. 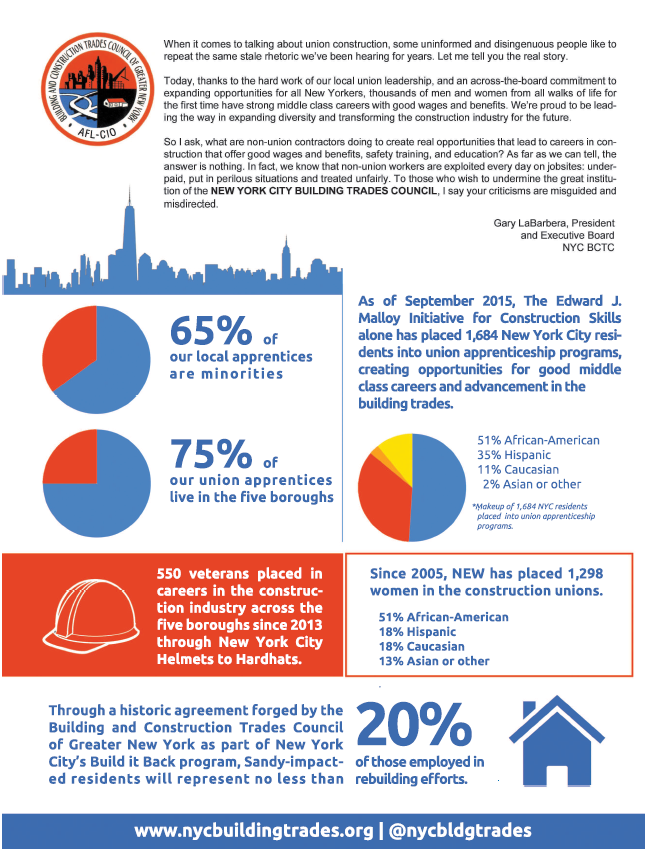 Perhaps they would have been better off keeping quiet.

Despite all that rhetoric and deflection (more apprentices!), the BCTC doesn’t address our critical point: Non-white union members in the construction industry make less than their white counterparts. And unions’ own actions likely shoulder much of the blame, as our Executive Director tells readers today of the Black Star News:

The BCTC might argue that White union workers tend to occupy positions in the industry that require more training and experience, but this begs the question: Why aren’t those higher-level positions equally available to Black workers in the same industry?

History might have something to do with it. The use of apprenticeship programs to hide a less-than-diverse workforce isn’t a new tactic: As the Christian Science Monitor wrote regarding the 1993 Dinkins report, “white male workers routinely became union members after working at a job site for one to four weeks, while minorities often spend four or five years in an apprenticeship program.”

If this practice has continued, it would explain both the disproportion of non-white apprentices and the wage gap in union construction, where union contracts and state wage rules set the apprentice pay below the full-rank “journeyman” pay. The BCTC has some explaining to do, and if the Daily News ad is any indication, they’re not up to the task.