Unions Paid This Website $504,000. You Won’t Believe What Happened Next. 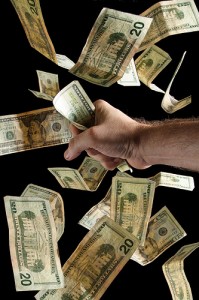 In late 2013 and early 2014, the Internet suffered a plague of psychologically tested headlines (similar to the one in this post title), unleashed on an unsuspecting public by a “viral content” site, Upworthy. And while changes to the Facebook algorithm have reduced the site’s ability to jackhammer vapid memes into people’s heads, the site is still around.

Earlier this week, with the SEIU and its front groups holding orchestrated protests as part of a corporate campaign to unionize fast food restaurants, Upworthy tweeted (or re-tweeted) dozens of bits of union propaganda and put several articles on its homepage touting the so-called strikes. While it isn’t surprising for a liberal website to push a left-wing message, Upworthy’s touting the campaign—like the campaign itself—conceals many moving parts.

First, take a close look at Upworthy’s “About” page. The site’s copyright is held by the company “Cloud Tiger Media.” And who, per chance, is a major client of Cloud Tiger Media? One American Federation of Labor-Congress of Industrial Organizations, better known as the AFL-CIO.

In 2014, Labor Department filings showed that the AFL-CIO paid Cloud Tiger $504,000 for “Consulting on Public Education of Labor Movement.” That followed up $300,000 from 2013, for a grand total of $804,000. In 2013, the SEIU chipped in $14,500 to the firm. Now, we can’t know whether Big Labor’s “consulting” payments drove the positive spin from Upworthy, but it sure is interesting how closely tied labor is to left-wing media outlets.