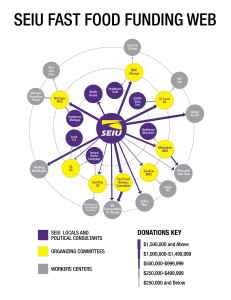 When you have invested over $15 million on a campaign, like the Service Employees International Union has on its “Fight for 15” effort to organize restaurant workers, a few setbacks are hardly enough to give up the ship. So, despite justified skepticism that SEIU’s coordinated actions are reflective of employee sentiment, tomorrow (September 4) the SEIU plans to again take its Worker Organizing Committees out on “strike.”

The supposed news hook for these latest stunts is “civil disobedience”—in union practice, typically staged arrests for trespassing or blocking a public roadway. Unions and worker center front groups like the “Fight for 15” do this sort of thing all the time.

It’s so routine that when SEIU International President Mary Kay Henry pulled one of these stunts as part of a coordinated protest at McDonald’s annual shareholder meeting, her Twitter pictures indicate she chummed it up with the police. A similar “worker center” campaign, the UFCW’s OUR Walmart, pulled the same stunt last November, with many professional labor activists getting themselves arrested.

In other words, the “get arrested” play isn’t even new by the standards of this campaign.

But as the campaign purportedly grows, dissent may be growing too. The SEIU represents very few restaurant workers, and The New York Times reports that not all members are happy about a highly speculative effort to press fry cooks into their ranks:

Within the SEIU, there has been some grumbling about why has the union spent millions of dollars to back the fast-food workers when they are not in the industries that the union has traditionally represented.

It isn’t said much, but the fast food organizing campaign is a fairly massive gamble by SEIU. Even if the federal judiciary conjures a reason to let the fishy legal theory that restaurants and branding licensors are “joint employers” stand, an actual effort to unionize the industry—even by card check—would be a massive, expensive undertaking. If it doesn’t pay off, the SEIU will find itself in deep, so expect the spending and the periodic press stunts to continue.