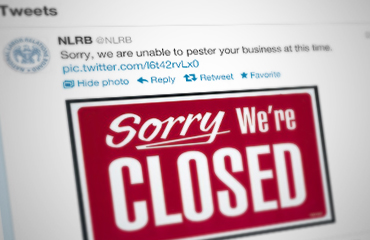 Since such occasions don’t come along every day, we decided we’d take this opportunity to go through and list some of the nuisances the NLRB won’t be able to perform until the government is open again. Among the many, it won’t be able to:

We also take this opportunity to point out that it shouldn’t require a government shutdown to escape such overreaches. Indeed, the Employee Rights Act would provide workers with additional legal tools by which they could protect themselves rather than waiting for the NLRB to do unions’ deeds.

None of this is to say that a government shutdown is a good thing. It’s only to say there’s a silver lining to all things – for workers, it’s sidelining the NLRB.