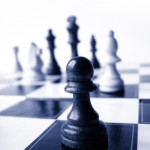 The SEIU front group Fast Food Forward is holding its second “strike” in New York City. The strikers marching under the banner of this “workers center” — see our previous coverage of these unions-in-sheep’s-clothing here — chose to walk out today because 45 years ago, civil rights leader Martin Luther King, Jr. was killed in Memphis.

And it is in the second item that labor reveals the second half of the pincer in its “new labor” model. We noted last year that labor unions were preparing a campaign to try to define union organizing as a “civil right.” The American Federation of State, County, and Municipal Employees (AFSCME) is also marking this anniversary to unjustly link modern unions with a source of moral authority. The Fast Food Forward organizers additionally found veterans of the civil rights movement to give speeches and consult with the unionization supporters.

But like the misleadingly named Employee Free Choice Act that would have effectively killed union members’ secret ballot, declaring a “civil right to collective bargaining” is another way for unions to curtail employee rights. Rather than adopting reforms supported by wide margins of union households (like those in the Employee Rights Act), labor unions hope that the courts can use legal blunt instruments to force more employees to pay union dues they would rather not pay.

Where they’ve been asked to weigh in, employees see through the smokescreen of undeserved moral authority. In the labor stronghold of Michigan, the notion failed when it was put to a vote. Indeed, labor’s overplaying its hand there probably helped lead to the granting of full free association rights to Michigan employees under the state’s new right-to-work law.