What Tennesseans Have to Say About the UAW

A Ford Motors plant is coming to Tennessee. While new jobs are certainly welcome, the UAW’s culture of corruption is not. In fact, a recent poll found that 2 out of 3 Tennesseans think Ford workers should have a secret ballot vote to decide whether they want to be represented by the union.

The Center for Union Facts has launched an education campaign in Tennessee to keep the UAW’s corruption out of the state. It includes a series of billboards and print ads in the state capitol that emphasize the need to preserve workers’ right to a secret ballot.

Tennesseans themselves had a lot to say about the UAW’s potential presence in Memphis. Here are just a few examples: 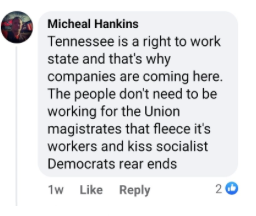 It looks like plenty of Tennesseans believe their state — and its auto jobs– are doing just fine without the corrupt influence of the UAW. We have to say we agree.