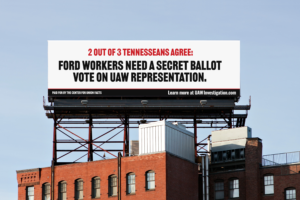 This week, as state lawmakers return to the Tennessee Capitol, the Center for Union Facts is launching the next phase of its public education campaign to keep United Auto Workers’ corruption out of Tennessee. The campaign includes five digital billboards and a full-page ad in the Tennessean that highlights a new statewide Engine Insights poll of 1,000 Tennesseans.

The billboards — which are located near the state capitol in Nashville, Tennessee — feature three different messages.

The full-page ad mirrors the recent polling data, stating that “UAW corruption has no place in Memphis.”
The majority of Tennesseans agree: employees at the forthcoming Ford auto plant deserve a secret ballot vote. It’s the fair and democratic way for workers to have their voices heard, especially regarding a union that still has a long way to go to rid its ranks of corruption.
Categories: UAW