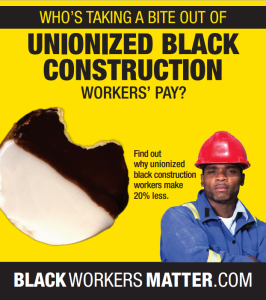 We’ve noted the fact that New York City construction unions’ black members make 20 percent less than white members. We’ve pondered why that might be, and a federal lawsuit that received a pre-trial hearing last week gives us considerable insight into how the locals represented by the Building and Construction Trades Council of Greater New York may have shortchanged the pay of their minority members.

The union allegedly allows its predominately white membership to refer new prospective members (who are predominately white) as full journeymen, while requiring prospective members without connections (who are more non-white) to do lower-paid apprenticeships. The plaintiff union members allege that the largely white referred new members get to skip apprenticeship even if they do not have “any qualifications other than being sponsored by an existing White [sic]  member.”

There are further allegations of the union rigging job placements in favor of white members. Using its control of the hiring hall system of job referrals, Local 14-B allegedly manipulates the hiring hall so that white members get jobs that last longer (which assures white members of higher earnings and less time unemployed). Even more egregious, Local 14-B’s absolute discretion for assigning “master mechanics” (essentially shop stewards) ensures a racial wage gap, as master mechanics who are appointed are allegedly “almost never” non-white. Master mechanics allegedly “can work virtually as much double time as he desires” and “easily earn several hundred thousand dollars a year.”

If the allegations are valid, it’s everything that we expected–a sordid situation where unions are keeping black workers in worse jobs than whites and using their control of internal union politics to deny plum job referrals to black workers. It’s time for construction unions in the Building and Construction Trades Council to stop hiding behind the diversity of lower-paid apprentice positions, and show the public the diversity stats for higher-paid positions that really matter.