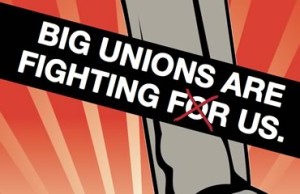 If a normal person stood outside his or her workplace and shouted racist epithets at coworkers and passersby, that person would be fired. But an Administrative Law Judge with the National Labor Relations Board has ruled that normal rules of civilized conduct don’t apply while on union business, ordering Anthony Runion, a United Steelworkers picketer who yelled racist comments at replacement workers, to be rehired.

It’s not a close call whether the comments were across generally respected lines of conduct, either. You can read what was allegedly said at The Daily Caller—we can’t reprint it on a family website.

And the NLRB judge agreed that Runion said the nasty things his employer said he said. But because “his conduct on the picket line, while racist and offensive, was not violent in character, not accompanied by violent or threatening behavior” the judge ruled that he could not be disciplined and had to be reinstated with back pay.

An apparent exemption—indeed, near-absolute protection—from social rules regarding civil conduct isn’t the only benefit that unions get from federal law. Even certain extortionate conduct “to achieve legitimate union objectives” is exempt from federal prohibitions, while numerous states have carve-outs letting unions get away with offenses that are crimes otherwise.

And while officials with President Obama’s notoriously partisan NLRB may not be willing to do anything about these loopholes, Congress and state legislatures might. The federal Employee Rights Act, soon to be reintroduced to Congress, would close federal loopholes unions exploit to make threats without federal sanction, while states are also exploring ending protection for union threats.