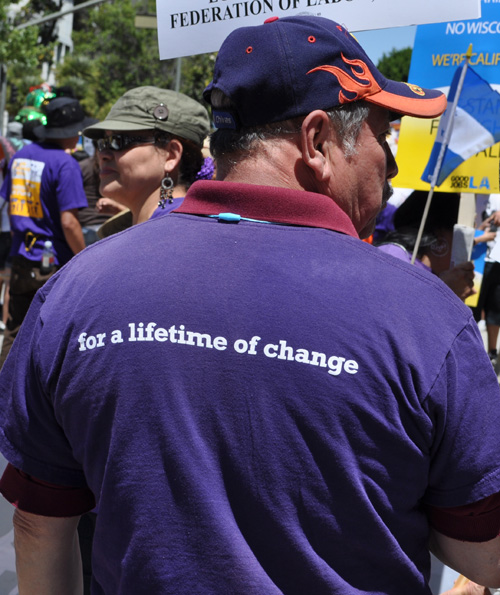 The following op-ed was written by Richard Berman, executive director for the Center for Union Facts, and was published in The Wall Street Journal on September 13, 2013. The online version may be found here.

On Monday the AFL-CIO voted near-unanimously to incorporate nonunion affiliates known as “worker centers” into its ranks. The impetus behind this move is what the federation’s president, Richard Trumka, has called the labor movement’s “crisis”—the percentage of the workforce that is unionized, 11.3%, is at a 97-year low.

Worker centers have been around for decades but more recently coalesced into a widespread movement. They attracted public attention this summer by staging nationwide “strikes” at fast-food restaurants and big-box retailers. While the demonstrations appeared to be standard union campaigns, the groups behind them legally identify themselves as nonprofits, charities, educational outfits and community organizations.

Their legal status is crucial, because it allows these groups to circumvent the National Labor Relations Act in their campaigns to organize the American workplace. In 2006, the National Labor Relations Board decided that worker centers are not subject to the federal regulations that govern unions so long as they limit their activities to making intransigent demands of an employer but demonstrate no intent to engage in back-and-forth negotiations.

Worker centers begin their campaigns by staging periodic protests and prolonged media campaigns alleging widespread mistreatment of employees by targeted employers. Unlike traditional unions, which are restricted to 30-day picketing unless they file a petition for representation, worker centers can engage in indefinite pickets. At no point do they have to petition the NLRB for an election.

This end-run around federal law helps unions in industries that have historically kept organized labor at arm’s length. Initially, worker-center “strikes” have few employees of a firm they protest, never close to the 30% that is required before a union can call for an election. For instance, Wal-Mart reported that fewer than 50 of its 1.3 million employees went on strike last week, and fast-food restaurants witnessed similarly small numbers of actual employees at strikes in July and August. Yet the strikes appear larger because they are swelled by professional union organizers and other labor-backed community groups.

The initial goal is to sway public opinion against an employer, which will then incite dissent among an ever-larger pool of employees. The final goal, though, is still unionization.

The most prominent worker centers have been established by major labor unions. For example, the recent spate of fast-food strikes, loosely organized under the banner of “Fight for 15,” is funded by the Service Employees International Union, which has given at least $7.5 million to the organizations behind the strikes.

Similarly, “OUR Walmart” was founded by the United Food and Commercial Workers International Union. And the “Restaurant Opportunities Center” (aka ROC), which targets non-fast-food restaurants in major American cities, is a creature of the Hotel Employees and Restaurant Employees International Union and is described by co-founder Saru Jayaraman as a tool for organizing “the 99% of the industry that doesn’t have a union.”

Worker centers have no standard membership model. Some of them, like ROC, have dues-paying members who are either restaurant employees or simply members of the community. Others, like OUR Walmart and Fast Food Forward, are largely made up of former union officials and organizers as well as a few employees who claim to represent similar-minded employees who just haven’t yet joined.

Because of their legal status, worker centers also dodge the standard union financial transparency and governance regulations under the Labor-Management Reporting and Disclosure Act. There are no officer elections, no annual financial filings with the Department of Labor, and no guarantees that the worker center is acting on behalf of employees’ interests.

These advantages have allowed the worker-center movement to flourish. The AFL-CIO reports that there are now 230 such groups active around the country. In 1992, Rutgers Prof. Janice Fine counted only five such organizations. With these groups now formally in the AFL-CIO, the labor movement stands to gain credibility among both progressives and the wider public.

For all of the publicity these worker centers have generated, it is still unclear whether they will succeed in organizing the workplace. Labor unions have turned to worker centers precisely because the necessary majority of employees are not interested in unionization. It is also a telling fact that the unions are more concerned with convincing the general public of the labor movement’s continued relevancy, rather than the employees they claim to represent.

Mr. Berman is the executive director of the Center for Union Facts.