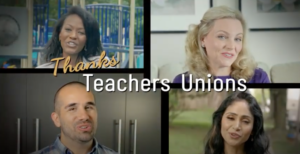 This Labor Day weekend, the Center for Union Facts launched a new campaign to hold teachers unions accountable for keeping schools shuttered and students stuck at home during the pandemic. Despite the best efforts of teachers union leaders — including the American Federation of Teachers’ (AFT) Randi Weingarten — to rewrite history, teachers unions were one of the main drivers behind the effort to keep schools closed.

Teachers unions ignored clear medical, scientific, and academic consensus that schools could and should safely reopen. As a result, students have fallen behind both academically and socially. Cities throughout the country have reported that minority students and students from low-income families in particular suffered the most from school closures.

The “Thanks Teachers Unions” campaign features a video advertisement where several parents sarcastically “thank” unions for keeping children home from school, allowing students to fall behind academically, and teaching controversial lesson plans in the classroom.

Frustrated parents can visit ThanksTeachersUnions.com to learn more about how teachers unions failed their children. They can also sign a petition to hold teachers unions accountable.

Teachers unions fought to keep schools closed for more than a year. Now that the damage done to students is clear, leaders of the nation’s largest teachers unions have the audacity to claim they wanted to reopen schools the whole time. But they shouldn’t be allowed to rewrite history. Parents and teachers alike won’t soon forget that unions advocated for shutting down schools and isolating children at home long after it was proven safe to let students return.