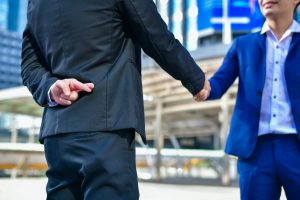 For reasons unrelated to the coronavirus, some union bosses might find themselves quarantined for some time — behind bars, that is. Check out the latest labor rackets from the past few months.

In Arkansas, Michael Johnson, former President and Business Manager of International Brotherhood of Electrical Workers (IBEW) Local 1658, was charged in a criminal information with one count of embezzlement of union funds in the amount of $9,317.

In Georgia, Janet Pilcher, former Secretary-Treasurer of National Association of Letter Carriers (NALC) Branch 536, was indicted for embezzlement of union funds in the amount of $65,033.

In Maine, Jeffrey Phillips, former Financial Secretary-Treasurer of International Association of Machinists and Aerospace Workers (IAMAW) Local Lodge 836, pleaded guilty to one count of stealing from within the territorial jurisdiction of the United States, in the amount of $57,610.

In North Carolina, Terry Slaughter, former Secretary Treasurer of United Food and Commercial Workers (UFCW) Local 1208, was sentenced to six months of imprisonment and three years of supervised release, and was ordered to pay $62,315 in restitution and a $100 fine.

In Michigan, Michael Grimes, a former senior official in the General Motors Department of the United Auto Workers (UAW), was sentenced to 28 months in prison and 12 months of supervised release. Grimes was also ordered to forfeit $1,509,500 in proceeds from his crimes and pay a $200 special assessment. On September 4, 2019, Grimes pleaded guilty to one count of conspiracy to commit honest services wire fraud and one count of conspiracy to commit money laundering.

In California, after a six-day trial, a jury found John S. Romero, former President of United Industrial Services Worker of America (UISWA), guilty of one count of conspiracy to commit theft or embezzlement in connection with health care (18 U.S.C. 371), 12 counts of theft or embezzlement of approximately $800,000 in connection with health care (18 U.S.C. 669), and one count of filing a false financial report with the Department of Labor, in which he failed to properly report the existence of more than $100,000 in receipts and disbursements (18 U.S.C. 1001). Romero’s family members, who were co-defendants (son John J. Romero, former UISWA Secretary-Treasurer; daughter Danae Romero, former UISWA Trustee; and ex-wife Evelyn Romero, former UISWA President), each previously pleaded guilty to counts under the indictment and testified at trial on behalf of the government.

In Pennsylvania, James Young, former President of American Federation of Teachers (AFT) Local 4973, was sentenced to two years of probation and was ordered to pay $5,450 in restitution and a $100 special assessment. As a condition of his probation, Young cannot visit a casino establishment during his two year probationary period. On October 23, 2019, Young pleaded guilty to one count of embezzling union funds totaling $7,050.