The United Auto Workers union might like you to forget that some of its top-ranking executives have been implicated or plead guilty in a federal corruption investigation. A new series of billboards ensures this won’t happen anytime soon.

For the next phase of a national education campaign on corruption in the ranks of the UAW, the Center for Union Facts has launched a series of high-profile billboards in Chattanooga, TN, and a mobile billboard in Detroit, MI, near the UAW headquarters. The billboards are part of an ongoing effort to educate the public and hold the UAW accountable for its “culture of corruption” and anti-worker tactics.

The billboards in Chattanooga are located along heavily-trafficked routes and feature the following facts about the UAW: 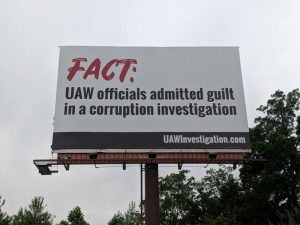 Thousands of auto jobs have been lost on the UAW’s watch. 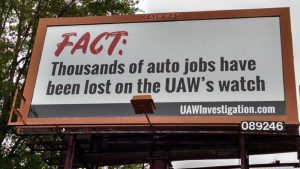 The UAW built a luxury home for its former president with non-union labor. 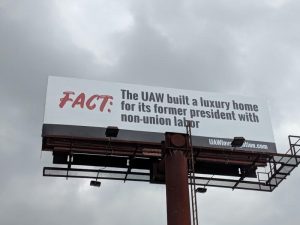 A series of digital billboards in Chattanooga will rotate through facts that readers of this website are well-acquainted with, including the “culture of corruption” identified by the Justice Department and the UAW’s huge drop in membership in 2018. And in Detroit, a mobile billboard featuring similar messages will travel between downtown and the UAW’s headquarters at Solidarity House.

If sunlight is truly the best disinfectant, perhaps these billboards are a small step towards UAW leadership seeing the error of its ways.