You can see the full report here: 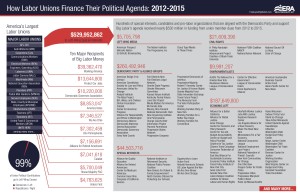 Yet roughly 40 percent of union households vote Republican in any given election cycle. (In 2016, the number was 43 percent.) The disturbing discrepancy points to the gradual evolution of labor unions from worker advocacy organizations to Democratic Party subsidiaries that are increasingly beholden to Democratic elites instead of blue-collar employees.

Under current labor law, union bosses are not required to obtain opt-in approval from their members before spending dues dollars on political advocacy and other activities totally unrelated to collective bargaining. Union members are forced to explicitly object to such spending in order to opt out, an arduous road paved with union intimidation. Fortunately, the Employee Rights Act (ERA)—a bill reintroduced in the 114th Congress—would update federal labor law to protect employees from unapproved political spending. The ERA would prevent union leadership from taking member dues and spending it on the National Action Network, Rainbow PUSH Coalition, and other liberal advocacy groups without prior approval.

Without it, Big Labor will continue to be the Democratic Party’s personal ATM—while union members foot the bill.