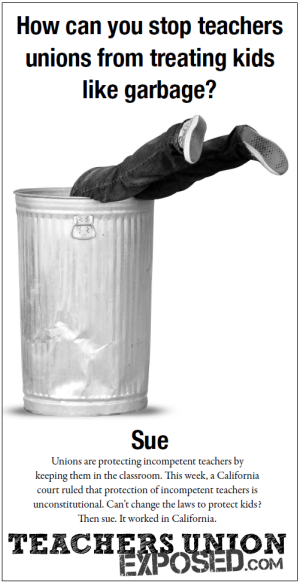 Largely as a result of this political power, California law on teacher accountability is essentially chapter-and-verse the unions’ preferences. California has an exceptionally short tenure evaluation period (2 years), a particularly onerous discipline-and-removal process, and a “last-in-first-out” policy that does not take effectiveness into account during layoff decisions—all positions demanded and defended by the teachers unions.

But California’s students—especially poor and minority students most exposed to ineffective teachers—pay the price. And legislators eyeing support from the CTA’s and CFT’s political war chests are in no mood to take proactive action for California children. The laws would not change.

A lawsuit filed on behalf of nine public schoolchildren alleged that California’s teacher union-backed disciplinary and hiring practices violated their constitutional rights to equal protection and to an effective public education. Despite both state teachers unions joining the state’s defense against the lawsuit, they lost. In his tentative decision, Superior Court Judge Rolf M. Treu of Los Angeles struck down those provisions in a victory for the students and their allies on all counts.

But many policy and legal analysts believe the students’ case will hold strong on the unions’ and state’s inevitable appeal. Robert Pugsley, a professor of law at Southwestern Law School in Los Angeles, told The Wall Street Journal that Judge Treu’s writing that union-caused education inequality “shocks the conscience” “indicates a strong evidentiary basis for his conclusion that appeals courts will give great weight to.” William Koski, a Stanford law professor, predicted the decision would have national “ripple effects.”

Indeed, it seems that by suing to get rid of the legal protections that teachers unions have spent a torrent of money to build, the litigants have found an effective way to combat their resistance to reform. As we note in our USA Today ad, we hope others follow the Californians’ lead.